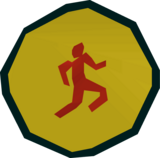 Marks of grace appear randomly as players traverse obstacles on Rooftop courses. Higher level courses have a greater chance of spawning marks. Marks spawned are player-specific, meaning players are only able to see and pick up marks spawned for them and not for other players.

When a mark appears on the course, players have 10 minutes to pick up a mark before it disappears. Marks spawn at random times at specific locations along a course. It is possible for multiple marks to spawn on the same tile, which will stack the marks of grace and reset the timer to 10 minutes, the mark will stay on the ground even while logged out. It is also possible to obtain marks of grace every lap or every other lap by collecting a mark of grace, moving 1 section forward in the agility course, waiting 3-4 minutes, and then continuing onto the next lap. Ardougne is the only exception; marks will last in the same spot until you log off.

Chances of obtaining marks of grace are reduced to 20% of the normal rate if the player's Agility level is 20 levels higher than the course requirement.[1] Until the player reaches that level, marks of grace will continue to spawn normally.[2]

Completing the easy, medium and hard Kandarin Diary increases the chance of receiving marks of grace during the Seers' Village Rooftop Course by 5%, 10% and 15%, respectively.

Completing the elite Ardougne Diary increases the chance of receiving marks of grace during the Ardougne Rooftop Course by 25%.

Marks seem to spawn based on your time spent on a course. When you've reached a time threshold, the course will allow a mark to spawn on the next lap or floor transition. This is evidenced by logging out/ staying on the final obstacle of a course, starting the next lap and guaranteeing a mark spawn.

Canifis Rooftop Course has the greatest chance at spawning marks for players between level 40 to 59 Agility, due to laps being very quick to finish, giving less of a delay for spawning the next mark when it's available and not having to require stamina potions. However, if one plans on training past 60 Agility, they should consider swapping to Falador Rooftop Course and the Wilderness Agility Course when they can as to reach the Seers course sooner. The Falador course offers 25% - 50% higher experience rates while sacrificing 7% - 10% of the marks generated.

Considering the price of amylase crystals, a mark of grace can be considered to be worth 9,740 coins.

Players can pay 90 marks of grace to recolour an entire graceful outfit, or 15 marks of grace per graceful article, to one of six different colours by talking to Osten in Shayzien as long as the player has 100% favour. Players can also buy a dark blue recolour, matching the agility cape's colour, by paying 250 agility arena tickets to Pirate Jackie the Fruit at the Brimhaven Agility Arena entrance. Additionally, players can spend 300 Hallowed Marks gained from the Hallowed Sepulchre to obtain the Dark dye to recolour a piece of a Graceful Outfit black.

The mark of grace is the item Falo requires players to show him when he sings about: A mark used to increase one's grace, found atop a seer's place.