Martin Holt is a man who is protesting against the Kourend Council, along with four other protesters, by the entrance of Kourend Castle. He is the founder of the Royal Society, a pro-monarchist group in Great Kourend.

After completing the quest A Kingdom Divided, he can be found on the 1st floor[UK]2nd floor[US] of the Kourend Castle.

Martin originally worked for the Kourend Council.[1] During his time working for them, he met Commander Lydia Fullore, the commander of the Royal Guard, and had a relationship with her, but it fell apart after some time.[2]

Over the course of his employment, he slowly began to see the true colours of the Kourend Council.[3] During his time managing the kingdom's treasury, a private business had made a big donation to the treasury,[4] hoping that it would be used to improve education in Port Piscarilius.[5] However, the Council ultimately ended up only spending a small sum of that donation, and used the rest for renovations in Kourend Castle,[6] which they claimed would make more money long-term due to the anticipated increase in tourism.[7] Martin, finally discontent with the Council, quit his job and founded the Royal Society.[8]

Martin, as leader of Kourend's Royal Society, occasionally ran protests in Kingstown against the Kourend Council. He steadily found more support from like-minded people desiring a return to royal rule, following Councillor Sophia Hughes' recent arrest after the discovery of her ties with the Disciples of Yama,[9] a Zamorakian cult who followed the demon Yama in the Chasm of Fire. The protests from the Royal Society only continued to grow after her escape and summoning of a demon in Port Piscarilius.[10]

Following Sophia's death, Commander Lydia Fullore began expressing doubts about the Council and sent an adventurer, who had helped arrest Sophia and faced the demon she summoned to Martin in order to find Rose and uncover the truth behind her disappearance from public life.[11] Being told by the adventurer that their investigation must be kept under wraps until concrete proof is found, Martin agrees to keep the matter a secret and they begin investigating Rose's whereabouts.

During the investigation, an assassin attempted to kill him, but he was protected by the adventurer. However, whilst looking for clues by The Legless Faun, he is arrested by Tomas Lawry for inciting violence against the Kourend Council and encouraging the people to take up arms against them,[12] and is sent to the Shayzien Prison.[13] 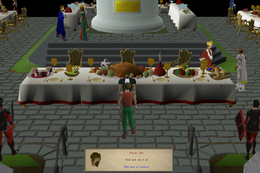 Little did Martin know that the adventurer's investigation would result in the Kourend Council's disbandment, and was freed from prison in time to vote for Rose's Accord,[14] which instated the Hosidius family to be Kourend's new royal family.[15]

For his assistance in exposing the Kourend Council's role in killing King Kharedst IV and Rose's disappearance, he was invited to the coronation of King Kandur Hosidius at Kourend Castle. However, the king was assassinated almost immediately after being crowned, and his eldest son, Artur Hosidius, takes over as King of Great Kourend. Presumably under Kandur's instruction, Martin remains at Kourend Castle and serves as an advisor to King Artur alongside Asteros Arceuus.[16]