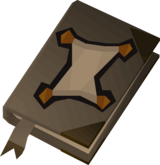 The master scroll book can store up to 1000 of every type of teleport scroll, which is done by "using" the scroll with the book. The player can open their book to show an interface where they can select any of the teleport scrolls stored in it to use or take scrolls out of the book. They can also set one of the scrolls in it as the default teleport option, which becomes the left-click option of the book.

Upon death, the scrolls are removed from the book and dropped along with the empty book.[2] 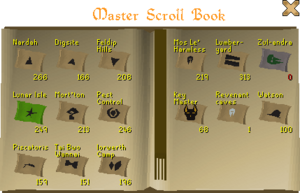 The master scroll book interface. Here, the Lunar Isle teleport is selected as the default left-click teleport on the book.