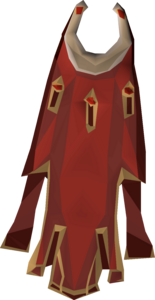 The max cape is a cape available to players who have attained level 99 in all 23 skills. It is sold by Mac for 2,277,000 coins (99,000 for each of the 23 skills). Mac is located on an island west of the Warriors' Guild, beyond the ladder that leads to Cyclops. To reach him, the player needs a pickaxe and an axe, as well as level 99 in Agility, Crafting, Construction, Defence, Mining, and Woodcutting.[1]

The minimum total level a player needs for the max cape is 2,277, the minimum amount of experience required being 299,791,913. When purchased, it comes along with a corresponding hood. Its stats are equivalent to a trimmed skillcape. It inherits all skillcape perks from other skillcapes. Like the ranging cape, a Vorkath's head can be used on the cape to increase its ammo-saving effects to match that of Ava's assembler. If you have already used a Vorkath's head on a ranging cape prior to obtaining a max cape you do not need to use another on the max cape.

Mac will purchase excess max capes for 1,821,600 coins. This can only be done if the player has both the hood and cape in their inventory. Other max cape variants can be refunded in the same manner.

This item can be stored in the cape rack of a costume room, as part of the Max cape set, along with the hood. Ultimate Ironmen will be unable to retrieve individual pieces until the full set is stored.

The max cape's emote shows the icons for all 23 skills flying above the character's head, and a bar graph stylized like the stats interface icon, with the player floating over it.

The infernal max cape, one of several max cape variants available to players.

The items that can be combined are as follows: