The maze is a random event initiated randomly by the appearance of the Mysterious Old Man, who offers the player a chance to complete a maze. It is favourable to complete over most other random events because the rewards it gives tend to be much more valuable than those given by other events despite taking longer to complete. 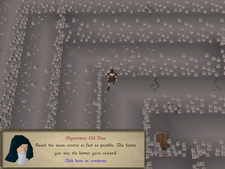 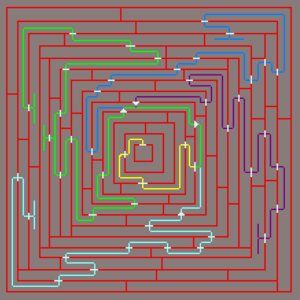 Routes to finish (map faces random direction when you enter)

The maze itself is a large square area full of "walls" made of floating cubes. The goal is to navigate through the maze to the centre and touch the rotating shrine found there; once the player does so, they will be teleported back to where they spoke to the Mysterious Old Man and will receive a reward. Run energy doesn't deplete at all in the area, so continuous running is strongly recommended.

While inside the maze, the bottom right corner of the screen displays the event's "reward potential", which starts at 100% and slowly drains away as the player spends time in the maze. Players typically finish with 65-75% reward potential, though this can vary with starting location. Players who reach 0% reward potential will be teleported out of the maze (back to where they were before the event started) with no reward. Some rewards can be very valuable in the amounts they are offered, with the highest rewards possibly around 155,400 (three times ~280 Death Runes).

Upon completion, the maze event will reward the player with varying amounts of three resources randomly selected from the table below, which can be the same or different resource each selection, scaled to the remaining reward potential and the player's skill total in the following manner:

where the divisor depends on the specific item rewarded in the following way: 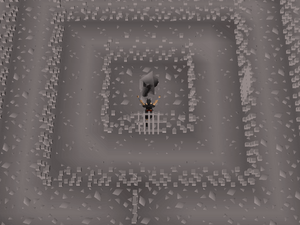 Furthermore, there are several rewards chests along the way which may give low-tier resources like elemental runes, bronze arrows and bolts, iron arrows, attack, strength and defence potions. Opening such a chest does not itself cost any reward potential, however the amount of time it takes to take the slight detour is generally not worth the cheap rewards.

Drop rates estimated based on 9,000 loots from the Drop Rate Project, unless otherwise cited.