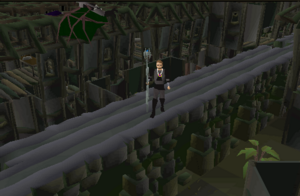 Meiyerditch is Morytania's largest city ruled by Lord Drakan and his family from the neighbouring city of vampyres Darkmeyer, the capital of Morytania. Meiyerditch is the largest known city in RuneScape and its primary use is for the vampyres to harvest the blood of the humans who live in its slum.

Getting to Meiyerditch[edit | edit source]

Players may reach Meiyerditch by boarding the boat south of Burgh de Rott, on the eastern dock., or by taking the rowboat to Slepe north of Port Phasmatys for 10,000 coins.

If a player plans to come to this city, the player must begin the Darkness of Hallowvale quest. The first thing any adventurer will notice is that Meiyerditch is patrolled by the invincible Vyrewatch. The only weapons that can kill them are the Ivandis flail and the Blisterwood flail. If they ask for a blood tithe, do not give it to them if you don't want to lose 6 of your hitpoints and try to distract them instead based on Thieving level (i.e. the higher the level, the less chance of failing). If this fails, the player will be forced to give a blood tithe. After some time into the Darkness of Hallowvale, the player will have another option of being sent to the mines instead of giving a blood tithe.

Alternatively after completing A Taste of Hope, the player is rewarded Drakan's medallion, which can be used to teleport to the Theatre of Blood in the southeastern part of Meiyerditch.

Once into the main part of the city, the player will be greeted by Meiyerditch citizens, Meiyerditch children, stray dogs, and cats. Also, to greet the player are level 46 Vampyre Juveniles, but they are non-aggressive.

The city is in ruin, which makes for good moderate level Agility training. Meiyerditch is essentially a highly populated Agility course if the player is doing Darkness of Hallowvale and is at the Agility section of navigating through the city.

The city also contains the Ver Sinhaza the former palace of Queen Efaritay, now ruled by Lady Verzik Vitur, hostess of the Theatre of Blood, a game challenge where the people of Meiyerditch can fight for their freedom, and players can fight for a chance of receiving valuable rewards.

The Daeyalt ore mines may be accessed either through attracting a Vyrewatch's attention and then asking to be sent to the mines, or going to the northeastern-most part of the city. These ores may be mined giving 17 experience each. However, the ores cannot be sold and cannot be smelted.

Meiyerditch has one lone shop down in the southwestern part of town where Trader Sven lives. He can sell you vyrewatch clothing, which for the whole set costs 1950 coins, or citizen clothing, which can be bought for 6 coins.

Meiyerditch is also where the player does a large part of Darkness of Hallowvale. The Myreque (Sanguinesti Order) base is found in a hidden trapdoor in the city.