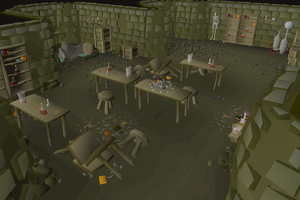 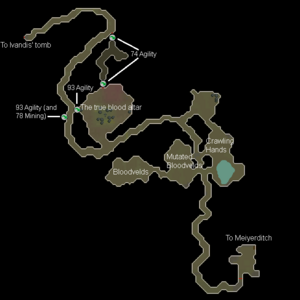 The Meiyerditch Laboratories are a set of winding tunnels beneath the Sanguinesti Region where the vampyres practised haemalchemy until they were suddenly shut down by Lord Drakan. Various gruesome experiments were conducted there on humans and bloodveld. The northern end of the tunnels connects to the tomb of Ivandis Seergaze.

During the quest Darkness of Hallowvale, the player visits the laboratories in search of possible research that may aid The Myreque in their fight against the vampyres, and during Sins of the Father, the player and Safalaan visits further beyond for additional research.

In the southern part of the dungeon, near the mutated bloodvelds, there are 3 log respawns and tinderbox. In the eastern part, crawling hands can be found as well. The entire area is also multicombat and the Dwarven multicannon can be used here thus making it an excellent place to kill bloodvelds with a cannon.

The entrance to the true blood altar is located within the northern part of the dungeon, though no blood talisman exists for players to enter the ruins. In this area, a nearby skeleton can be searched for a tatty note.

The entrance to the Meiyerditch Laboratory is in the house with the slashed tapestry, which is southwest of the location you arrive at once exiting the Meiyerditch mine.

Route to the Meiyerditch Laboratories.