The Meiyerditch Mine is a mine located within the city of Meiyerditch. It is the only mine that has Daeyalt veins, which contain Daeyalt ore inside them. A player is sent here if they refuse to give a blood tithe to a Vyrewatch in Meiyerditch. Once in the mine, a player must mine 15 ores before the vampyres will let them leave. If the player did not bring a pickaxe, they can ask the Meiyerditch miners for a spare bronze pickaxe. When players leave the mine, they appear in the north-east corner of Meiyerditch. The mine cannot be accessed by going down the same ladder that you can leave the mine from. The mine is filled with human slaves who cannot mine enough ore to leave, and therefore are trapped there forever.

Players, if interested, may take the Daeyalt ore outside the mine by mining 15 of them, talk to the vampyre to gain the ability to leave, and then mine more ores before leaving. However, the Daeyalt ore has no use outside the mine as it cannot be smelted or traded. The mine contains Meiyerditch miners and unattackable Vampyre Juvinates. Alternatively, they can simply mine an ore and teleport out.

According to Jagex, this was one of the hiding places for the Stone of Jas. As such, the Stone's presence altered the surrounding rocks to become Daeyalt ore, similar to how the Stone imbued rune essence and the Fist of Guthix with its power.[1] 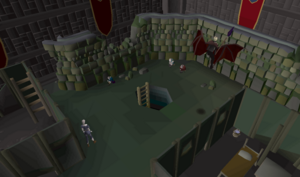 The mine entrance near Darkmeyer.