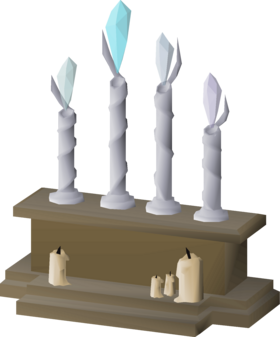 The Memoriam Device is a device found on the top floor of the Tower of Voices, in the southern room. Players can use four memoriam crystals found throughout Prifddinas on the device to view some of the memories of Seren. When viewing her memories, the Memory of Seren will speak inside player's heads.

Interacting with it also allows the player to challenge the Fragment of Seren again after completion of the Song of the Elves quest, where dying is considered a safe death. The noticeboard next to it tracks the player's kill count and best kill times. When players choose to fight her again, a message in the chat box will state "Your mind becomes consumed by the darkness."

In addition, cutscenes from the quest can also be watched again, namely:

1. Confronting the King
2. The Execution
3. The Escape
4. Attack on Lletya
5. Lord Iorwerth Arrives
6. The Betrayal
7. The Confrontation
8. The Funeral
9. The Meeting
A. The Battle Begins
B. Essyllt Arrives
C. The Battle Ends
D. The Temple of Light
E. The Fragment of Seren
F. Iorwerth's Defeat
G. Entering Prifddinas