Menaphos is a city located far south in the Kharidian Desert and ruled by the Pharaoh. It is not yet accessible due to the inhabitants' fear of the plague in neighbouring Sophanem.

Menaphos is one of Gielinor's oldest cities dating back to the Second Age. Despite its age and significance, little is known about the city. The city consists of four districts: the imperial district, the merchants' district, the docks and the slums.

The city closed its gates when the plagues began in the neighboring city Sophanem. Although the plagues have been proven limited and non-contagious, Menaphos still remains inaccessible. In the quest Contact! the High Priest of Sophanem, after having been chased away by Menaphite rangers, asks the player to help him get back into contact with Sophanite citizens trapped in Menaphos. 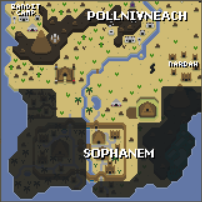 A preview of Menaphos and surrounding areas seen on the Trailblazer League map.