Merlin's Crystal is the first quest in the Camelot quest series, and involves the player rescuing the wizard Merlin from a crystal. 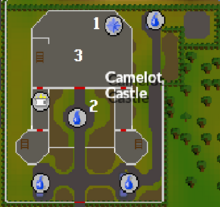 To begin the quest, talk to King Arthur in Camelot, east of Seers' Village. Ask him if you can join the Knights of the Round Table, and he'll suggest you complete a quest first to prove yourself. He'll tell you that his friend and mentor, Merlin, has been trapped in a crystal, yet he cannot break him out of it. Arthur will tell you to ask the other knights if they have any ideas.

Go talk to the other knights around Camelot. First, you should speak to Sir Gawain (who can be found either roaming in the courtyard or inside the castle) and talk to him about Merlin, be sure to discuss both options. He'll mention that perhaps Morgan Le Faye will know, since she created the enchantment. However, he does not know how to get into her keep.

Items required: A bucket of wax or an empty bucket (obtainable during quest).

Now that you've got a lead, head down the road to the south to Catherby. Once in Catherby, just south of the bank on the dock is a general store merchant named Arhein, speak with him about his boat and where it is going. In a house north of the bank, you can find a bottle of insect repellent on a table; take it. Grab some armour and go just north of the dock between the bank and the Candle Shop, and you'll find a few crates against the back of the candle shop. You can click on them to hide inside. There will be a bit of dialogue as workers come to pack you up and put you in the boat. After a while, you'll end up in the Keep Le Faye, when prompted choose yes to climb out. 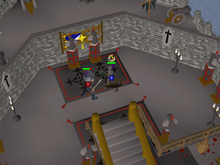 Watch out for the renegade knights that are wandering around the castle, and run up the stairs to the very top floor. Up here, you'll find Sir Mordred (level 39). Fight him and just as you are about to defeat him, Morgan Le Faye will appear, begging you not to kill her son. You must spare him in order to proceed. In exchange for sparing him, she will finally tell you how to release Merlin. You will need a number of things to do so, noted below.

Note: Be careful not to interrupt the conversation, or you'll have to fight Sir Mordred again! Running out of prayer points will interrupt the dialogue.

There are giant bats (level 27) right outside the Keep. Just go down the stairs to the ground floor[UK]1st floor[US] to get outside and kill one. If you leave you cannot get back in.

If you need a bucket of wax, head north from the keep where there is a fenced in area full of bee hives (near the flax field). Pick up the bucket near the gate, use the insect repellent on a hive to temporarily drive the bees away, and then use the bucket to get some wax. If you have the bucket of wax already, you can return to Catherby by hiding in the crates on the docks at Keep Le Faye.

Note: If you went outside of the Keep to get the Bucket of wax, you can't go inside of the keep anymore, you will need to hide in the crate in Catherby again. 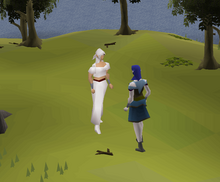 The Lady of the Lake

Recommended: 2 Falador teleport tablets to get to and back from Taverley. 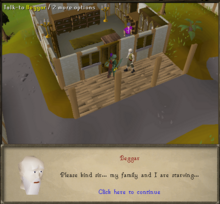 Talking to the beggar.

Along the way, grab a loaf of bread, then head to Port Sarim. You can talk to Veos to travel to Port Piscarilius, and run south to Hosidius to buy or steal bread. A pot of flour is purchasable in Wydin's Food Store to bake your own. As you open the door to the jewel shop in Port Sarim, a beggar will approach you, begging you for some food to feed his starving family. Give him the loaf of bread. When you do, he will then change into the Lady of the Lake, who was simply testing the purity of your spirit. Satisfied, she'll give you the sword Excalibur.

Note: Do not click anything but "Click here to continue" in the dialogue box, not even "Talk to Lady of the Lake", until you get the sword. It will reset her dialogue and you will need another piece of bread. 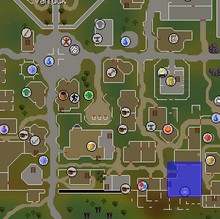 The location of the chaos altar, in the south-east corner of Varrock.

Go to Varrock and then to the Zamorak chaos temple in the south-east corner of the city. "Check" the altar to find the words needed: "Snarthon Candtrick Termanto". Make sure to click continue to complete the dialogue.

Note: You must go read the words on the altar, or you won't be able to progress further through the quest.

Now to free the wizard. First, head back to Camelot. The magical symbol is on the north-east side of the castle just inside the fence. Light your black candle and drop the bat bones (be careful not to bury them) in the circle. A demonic spirit named Thrantax the Mighty will appear, and you will be prompted to say the magic words: "Snarthon Candtrick Termanto". If you get it right, the spirit will obey you.

Warning: If you recite the wrong phrase, the spirit will attack you and you will have to get a new black candle and try again. Be careful as it's level 92, with a max hit of 10, and it can hit rather accurately.

Once the spirit is under your control, you'll make your request to free Merlin, and the spirit will do as you wish. Now, go back inside Camelot Castle, and climb up the south-east ladder to the very top of the south-east tower. At the top, Merlin will be imprisoned in a blue crystal. Use Excalibur on the crystal, and it will shatter.

Head back down and talk to King Arthur to finish the quest. 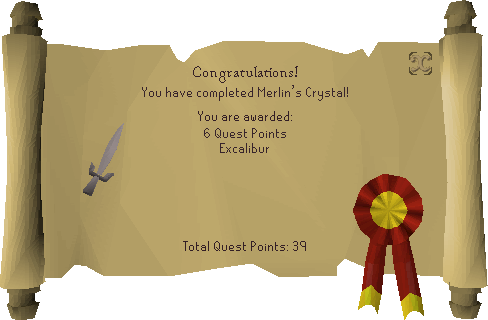 Completion of Merlin's Crystal is required for the following: