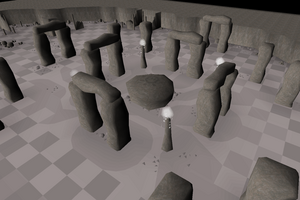 Inside the Mind altar. 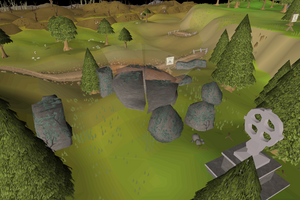 Outside the Mind altar.

The Mind altar is a runecrafting altar located far north of Falador in between the northern end of Ice Mountain and Goblin Village. It is used for crafting mind runes out of either rune essence or pure essence, granting 5.5 experience. One can teleport here using the mind altar teleport spell or tablet.

As with most other Runecrafting altars, it can be accessed via the Abyss. Players could also enter its ruins by using a mind talisman or simply click on the ruins while wearing a mind tiara.

The maximal amount of mind runes that can be crafted in one run is 2256, by carrying one Giant pouch full of essence and 27 mind cores with a Runecraft level of at least 98 (at level 98 you get eight times the amount of mind runes per essence). This would give 1551 experience.

However, obtaining considerable amounts of mind cores is time-consuming.

The maximal amount of mind runes crafted in one run without using cores is 432. This would be achieved by having 98 Runecraft and carrying 54 essence to craft (24 in the normal inventory along with 30 in the 4 sizes of pouches). This would result in 297 experience.

A mind tiara may be created at this altar by having a mind talisman and a normal tiara in your inventory. The player must use the talisman or the tiara on the altar. Doing so will earn 27.5 Runecraft experience.