The Mining Guild, located in and beneath Falador, is a guild for expert miners available to players with at least 60 Mining (can be boosted). The mine is accessible from either the Mining Guild's above-ground complex in the south-east of the city, or through the gate at the southern end of the Dwarven Mine. Both of these entrances are guarded by dwarves who will answer questions about the guild and stop players without the requirements from entering the guild.

The mine is one of ten areas in Old School RuneScape where three iron rocks can be mined without moving, making it ideal for power levelling. 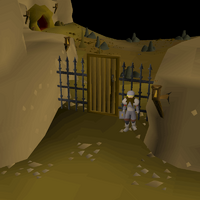 The entrance to the Mining Guild from the Dwarven Mine. 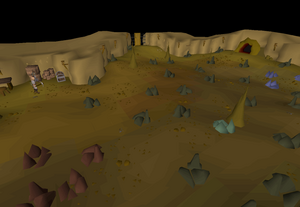 In addition, there are two shops found in the centre: Yarsul's Prodigious Pickaxes, which sells pickaxes, and Hendor's Awesome Ores, which sells ores (with zero stock). 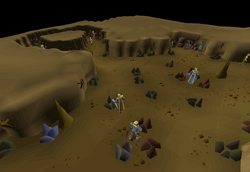 Inside the Mining Guild's members-only area.

Other than Old School RuneScape membership, there are no additional requirements to enter the members' area.

There is also a bank chest, a bank deposit box, and a poll booth.

While inside this area of the guild, players will receive an invisible +7 level boost to their Mining. This boost will stack with any existing boosts the player already has, such as the visible +3 boost from using the dragon pickaxe's special attack as well as the invisible +4 boost from the Celestial ring/Celestial signet, though visible boosts are capped to level 99.[1] However, the invisible boost will not allow a player to perform actions above their base level. In addition, the respawn time for rocks mined in this area is halved.

This area is the only location in which players can mine amethyst crystals (with the mining area west of the bank requiring completion of the Falador Diary). Players must speak to Belona to access the diary-only mining area.

Mining any of the rocks in this area gives a chance of receiving unidentified minerals. These can be traded in for mining gloves or superior mining gloves from Belona's shop, Mining Guild Mineral Exchange. If players do not want to receive them, they can be disabled by right-clicking "Toggle-minerals" on Belona.

When using an infernal pickaxe in the members area of the Mining Guild, the Smithing effect will NOT negate the ability to receive unidentified minerals upon its proc.