Miscellania is an island kingdom in the Lunar Sea, north-west of the coast of the Fremennik Province.

Prior to the player intertwining themselves in the affairs of these two islands, King Vargas of Miscellania and Queen Sigrid of Etceteria had been at war for 100 years.

The islands are unusual in that after the completion of the quest Throne of Miscellania, they can be managed by the player. Most resources on the island, if obtained by working them, will be sent directly to the citizens, raising the player's popularity. One of the fastest methods to gain approval is by cutting Teak trees on Etceteria for Carpenter Kjallak. Few things can be gathered by the player directly here.

There is a bank on the north-east side of the neighbouring island of Etceteria.

A usable anvil can be found to the north of Miscellania.

There are fish and vegetable stalls in the courtyards of the Miscellanian castle which sell a variety of fishing gear, raw sardines and common vegetables: the Greengrocer of Miscellania and Island Fishmonger. Mixed flowers can be bought from Flower Girl in the castle courtyard for 15gp each.

Vast wheat, potato and cabbage fields can be found on the southern side of Miscellania. Anything collected from them will be directly obtained by the player and not count towards increasing popularity. If wheat is taken from the wheat field, the Farmer tending to it will respond by saying "Oi! Leave my wheat alone!" However, this has no negative affect on popularity.

The Miscellanian side of the Miscellanian and Etceterian Dungeon (which can only be accessed once the player is permitted to do so during the Royal Trouble quest) contains the small Fremennik settlement expansion, which consists of many additional shops, those being:

Directly north of the shops are a bronze pickaxe spawn (indicated by a rock with the option "Take-pickaxe Rocks") and small coal mine, the pickaxes and coal being obtainable by the player.

The caves also have many Sea Snake Hatchlings and Sea Snake Youngs the player can fight on the Etceterian side of the caves. 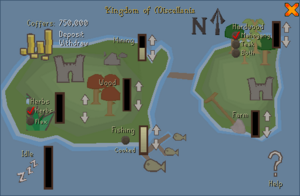 The interface of Managing Miscellania.

Once the Throne of Miscellania quest has been completed, the player becomes Prince or Princess Regent of the island of Miscellania. The citizens of Miscellania will then work, if funded properly and if the player's popularity is high enough, to gather a variety of resources.

Resource gathering and the funding of it can be managed through Advisor Ghrim, who resides in the throne room in the castle on Miscellania.

If the subsequent quest Royal Trouble has been completed, the Kingdom of Etceteria will also begin working for the player.

Almost all resources the player collects on the island will be sent directly to the citizens of the island, increasing the popularity of the player for having done so. Resources can only be obtained on Miscellania through kingdom management, buying them from shops, the bush patch on Etceteria, the wheat and vegetable fields on the southern part of Miscellania, and the Miscellania and Etceteria Dungeon.