From Old School RuneScape Wiki
Jump to navigation Jump to search
The RuneScape Wiki also has an article on: rsw:Miscellania and Etceteria Dungeon

Prior to recent times, the cave system was, as its name implies, used as a dungeon, but became neglected due to the lack of need for one. After the events of Throne of Miscellania, people began emigrating to Miscellania and the monarchs of the island began utilizing the dungeon to provide shelter for them (one of the reasons given being that no building material was strong enough to withstand the strong winds on the surface of the island). Thus, Miscellania's subterranean expansion project, has resulted in a Fremennik and Dwarven settlement.

The player cannot access the settlement until permitted to enter the dungeon during the quest Royal Trouble. The full cave system cannot be accessed until after the boss fight of the same quest, although the chamber the Giant Sea Snake is fought in becomes closed off after the fight.

The settlement consists of several shops, those being:

Directly north of the settlement are a bronze pickaxe spawn (indicated by a rock with the option "Take-pickaxe Rocks") and small coal mine, the pickaxes and coal being obtainable by the player and not used in Miscellania management.

The caves also have many Sea Snake Hatchlings and Sea Snake Youngs the player can fight. 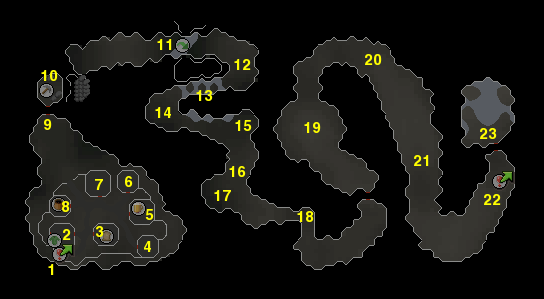