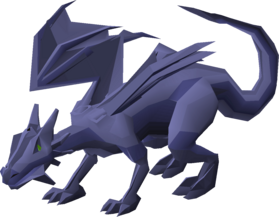 Mithril dragons can be found and fought in the Ancient Cavern. To access the Ancient Cavern, the player needs to start the pyre ship section of Firemaking in Barbarian Training. Be wary as these monsters are extremely powerful. Their release broke the King Black Dragon's long-standing record as being the strongest dragon in RuneScape. It is strongly recommended to use antifire potions in conjunction with an anti-dragon shield (or a Dragonfire shield) when fighting these along with the appropriate protection prayer.

The ability to be assigned mithril dragons can be purchased for 80 Slayer reward points. Once unlocked, they can be disabled, but players must spend another 80 points to unlock them again. Players also must have entered the Ancient Cavern at least once to get mithril dragons as a Slayer task.[1]

If they are fought without complete dragonfire protection, it is recommended to stay in melee range and use Protect from Melee, to reduce the amount of dragonfire damage taken.

One mithril dragon is fought during Dragon Slayer II.

To access the Ancient Cavern, one must have completed the first part of Barbarian Firemaking training and then talked to Otto about pyre ships. After the conversation is over, the player can now go in the whirlpool. Upon entering, one must climb down stairs and then run south to a set of stairs leading up to the mithril dragons.

The old appearance of the mithril dragon.