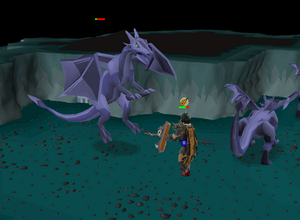 A player fighting a mithril dragon.

At level 304, Mithril dragons are the third strongest tier of metal dragons. They attack from all sides of the Combat triangle in addition to utilising extra long-ranged dragonfire. Players seeking to kill these powerful dragons will need to tank at least one combat style, especially when fighting within Melee distance.

Melee is one of the most effective ways to kill mithril dragons with high stats and when using the dragon hunter lance. If the player does not have the dragon hunter lance, ghrazi rapier and zamorakian hasta are still viable options, however Magic is usually more effective depending on the player's equipment. For the best damage output, it is strongly recommended to use a defender and use extended super antifire potions to negate the dragonfire damage. When meleeing, players take damage from two combat styles and will have to tank both in order to survive. It is best to wear Bandos armour for its strength bonus and good defensive bonuses, and use Protect from Magic. If the player does not have Bandos armour, wearing armour with high Magic defence (such as Karil's armour or black dragonhide armour) and using Protect from Melee will suffice. Piety should also be used in conjunction with the chosen protection prayer for better damage output and higher Defence.

Magic is the most effective way to kill mithril dragons with high-level equipment. The harmonised nightmare staff and casting Fire Surge while wearing the tome of fire offers the highest damage output. Powered staves, such as the sanguinesti staff or trident of the swamp are still viable even at lower levels, and usually the best options for those who cannot afford expensive high-level equipment. However, using Melee is much more cost-effective, and the dragon hunter lance offers comparable or higher damage output in most cases. Players should wear equipment that maximises Magic damage and accuracy bonuses. When maging, players should stand at a distance and use Protect from Missiles. Lastly, Augury or Mystic Might should be used for better damage output and higher Magic defence. If the player is not wearing an ancient wyvern shield or an anti-dragon shield, players must use extended super antifire potions (or their unextended versions) to negate the dragonfire damage.

Ranged is a similar option to Magic in that damage taken will be largely prevented by Protect from Missiles and high magic defence bonuses from equipment. Due to the high ranged defence of Mithril dragons, the high Ranged Attack bonus granted by using crossbows like the dragon hunter crossbow is necessary. Ruby dragon bolts (e) and diamond dragon bolts (e) are very effective, but come at a high cost and can only be used if using a Dragon crossbow or better. If using enchanted ruby dragon bolts, players should switch to their enchanted diamond dragon bolts at 100-150 HP. Amethyst broad bolts can be used instead as a more cost-effective ammunition alternative, but can significantly increase the time taken for a kill. Players should use Protect from Missiles with Rigour or Eagle Eye. Since Ranged armour has high Magic defence, all magic damage should be tanked but Rigour will be a large boost as unlike Eagle Eye it provides some defensive bonuses of its own.