Mogres are Slayer monsters and a type of ogre that are found in Mudskipper Point. They can only be killed by players who have completed the Skippy and the Mogres miniquest and level 32 Slayer. Mogres appear when disturbed by the player, who must lure them using Fishing explosives on an Ominous Fishing Spot.

Note: Mogres can only be "lured" by clicking Use on the Fishing explosives in your inventory, then clicking on the Ominous fishing spots while also standing a few tiles away. The Ominous fishing spots technically give you a clickable option to "Lure" or "Bait". However even with Fishing explosives in your inventory, both these options do nothing and instead merely say in chat "Something seems to have scared all the fishes away..."

Mogres are usually killed by players searching for their unique drops of Flippers or Mudskipper hats.

Killing a Mogre is a requirement for completing the medium task set in the Falador Diary. 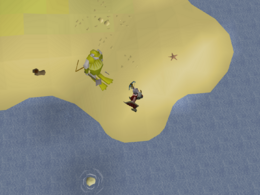 A safespot for fighting WEST side lure.

Mogres can be safespotted by using the fairy ring, the STASH unit to the west, or along the shoreline. As a low level player it could be a good idea to bring a tinderbox and logs as mogres often drop raw fish. There is also an altar just to the north of mudskipper point if one wanted to pray protect from melee. 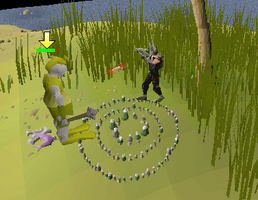 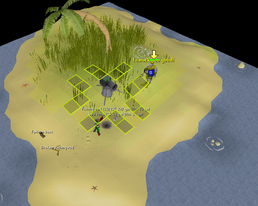 A safespot for fighting Mogres using a Halberd and/or Cannon.

When a mogre appears, they say one of the following phrases:

Drop rates estimated based on 900,109 kills from the Drop Rate Project, unless otherwise cited.

There is a 13/128 chance of rolling the uncommon seed drop table.