From Old School RuneScape Wiki
Jump to navigation Jump to search
The RuneScape Wiki also has an article on: rsw:Mogre Camp
This article is about the underwater area beneath Port Khazard. For other uses, see Underwater (disambiguation).

The Mogre Camp is an underwater area accessed during and after saving Pirate Pete for Recipe for Disaster. In order to enter the underwater area, the player must equip a fishbowl helmet and a diving apparatus and weigh less than 27 kilograms, and speak to Murphy at Port Khazard to go diving. The brine sabre's special attacks can also be used down here.

Kelp, which can be ground and used as an ingredient for fishcakes (used for freeing Pirate Pete during Recipe for Disaster), also grows here. 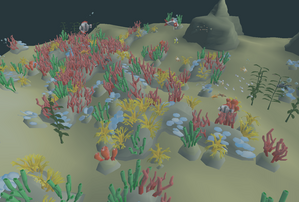 A large coral reef grows in the centre of the Mogre Camp.

The nature of the Southern Sea in which the Mogre Camp exists has allowed for a large array of fish to inhabit the area. They cannot be caught, but can be seen swimming amongst the coral. The following species have been identified: 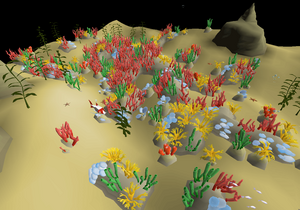 The Mogre Camp's appearance without the water overlay.
Retrieved from ‘https://oldschool.runescape.wiki/w/Mogre_Camp?oldid=14363985’
Categories: