Molanisks are Slayer monsters that require level 39 Slayer to kill giving 52 Slayer experience per kill. A Slayer bell is necessary to fight them. Players should remember to bring a light source when fighting them, as they are only found underground. Molanisks do unusually low damage, meaning a player with half-decent armour should easily be able to kill them with no trouble. 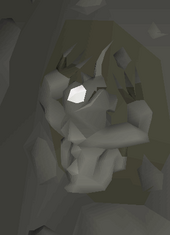 A molanisk disguised on a wall.

Molanisks are found attached to cave walls and must be lured off with a Slayer bell to allow players to attack them. When lured off the wall, they are aggressive towards the player who lured them off with the bell. Molanisks respawn relatively quickly, so players who want to conserve run energy can just stay at the same respawn location.

Molanisks are relatively weak to both crush and magic attacks.

If you are getting attacked by another monster, for example a Cave Crawler, and then use the Slayer bell, the Molanisk will attack you and the monster initially attacking you will lose its aggression. 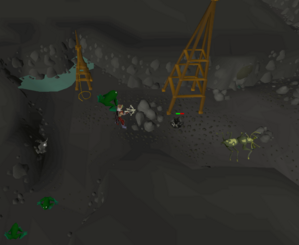 Drop rates estimated based on 61,398 samples from the Drop Rate Project, unless otherwise cited.

There is a 7/128 chance of rolling the gem drop table.