Molch is a small settlement found in the Kebos Swamp, a swamp in the Kebos Lowlands. It is inhabited by lizardmen. A lizardman shaman named Ek'ans Chan can be seen chanting. In addition, two enclosures containing unattackable swamp frogs can be found, suggesting the lizardmen use them as a source of food.

A step pyramid can be found here with an altar dedicated to Xeric. In addition, there are four entrances to the Lizardman Temple, containing six lizardman shamans in a single-way combat area.

A quick way to travel to Molch is to use a Skills necklace to teleport to the Farming Guild and run south across the bridge and through the swamp. Another quick way is to use the fairy ring code DJR, running west and taking the Boaty directly to Molch. 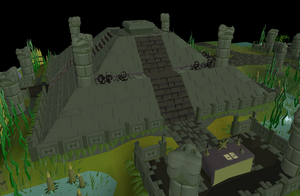