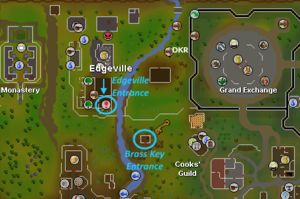 Go south of Edgeville bank or to the shed west of the Cooks' Guild with a brass key. 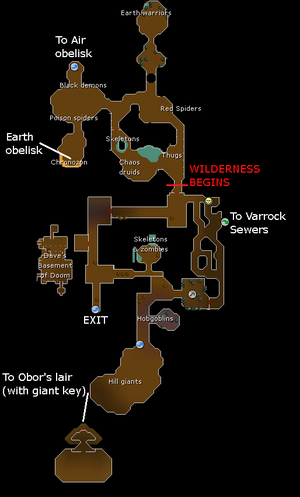 A map of Edgeville Dungeon.

Air orbs are worth 1,226 coins, and they are created by casting Charge Air Orb on the Air Obelisk with unpowered orbs in your inventory. With an air staff equipped, this requires three cosmic runes per cast, costing 336 coins. Using the Amulet of glory to teleport to Edgeville for banking, players can charge up to 27 orbs per trip (one inventory slot is needed for the cosmic runes), resulting in a maximum profit of 20,979 coins per trip.

However, due to run energy depletion, it can be more worthwhile to withdraw 2 energy potion(4) and only charge 25 orbs per run. This method yields slightly lower profits per run (18,513 coins), but enables higher overall hourly profit due to being able to constantly run. Each trip takes approximately 170 seconds, allowing 21 trips per hour. One trip uses about 75% energy (without weight-reducing clothing) and roughly 10% energy is recuperated (at level 1 agility) while charging the 25 orbs. Consume 6 or 7 doses of energy potion per trip, while running through the dungeon, and bank all leftover doses to be re-combined later.

The Air Obelisk is located on an island in the Wilderness only accessible via Edgeville Dungeon. Using the map on the right as a guide through the dungeon, it is recommended to take the northern route through the wilderness portion of the trek since the chaos druids along the southern route can cast a binding-like spell. There is also an extra gate you must pass through when taking the southern route. It is possible to gain up to 39,900 Magic experience per hour doing this, making it a notable training method. Players are able to gain moderate experience and profit at the same time.

Bear in mind that running through the Edgeville dungeon places you in combat range of aggressive thugs, chaos druids, deadly red spiders, skeletons, and black demons, so a good Defence level or food could help. Since it is in the Wilderness, players should not take anything they are not prepared to lose. It is highly recommended to take only 75 cosmic runes per trip to avoid losing a lot of money if you are getting killed.

Check the live price and daily volume of items on the Grand Exchange before making large investments in any method.
All prices on this page are cached, meaning they may be out of date.
To force a new cache of this page, click this link.
If a money making method is out of date, you can edit it or leave a message on the talk page.
Retrieved from ‘https://oldschool.runescape.wiki/w/Money_making_guide/Charging_air_orbs?oldid=14325867’
Category:
Hidden category: