Warning: There is a small risk of dying for lower level players. Ghasts do not hit very hard, but the damage does add up over time.

The best spot to cast Bloom before completion of A Taste of Hope.

Collecting Mort myre fungi is very profitable as it is the secondary ingredient for making Super energy potions. Completing the Hard Morytania diary doubles the amount of fungi collected, (Morytania legs do not have to be worn). Casting Bloom affects rotting objects in the eight squares around the player and consumes between 1 and 6 Prayer points. Optimally, use a place with 3 or more rotting logs to increase the chance of obtaining mort myre fungus. The best location is 4 logs south of Port Phasmatys as shown in the image on the right, it is unlikely Prayer potions will be required with at least 45–50 Prayer.

Mort myre fungi will not spawn every time, but always pick from a northern log last because when picked, you will return to the middle, removing the need to click back.

Inventory setup should include a 4-dose Prayer potion, and because lower Prayer level means lower points restored, lower levels may need to bring more than one Prayer potion.

For the 4-log location: Use an ectophial or fairy ring alq and run south. Cast Bloom while standing in the middle of the 4 rotting logs as shown on the image.

For a good 3-log location: Use the fairy ring bkr and run west to three rotting logs. Stand in the middle of them and cast Bloom.

To bank and restore, players can go to Castle Wars using a Ring of Dueling, and then with the Ardougne cloak 1 from completing the easy Ardougne Diary, teleport to the Ardougne Monastery to restore their Prayer. From there run east to the Tower of Life and use fairy ring djp to return to Mort Myre Swamp. Optionally players can teleport to the Ferox Enclave using a Ring of dueling to use a Pool of Refreshment and a very close bank, but there is no nearby fairy ring.

Another method involves utilising the Nature Grotto, therefore not requiring prayer potions. Use bip to travel to a small island next to the swamp, and jump across the nearby Agility shortcut, requiring 50 Agility. Once in the swamp, run north to find 2 logs forming an "L" shape. Cast bloom here, a pray at the Grotto nearby every now and then to recharge. Lastly, travel back to the island and take fairy ring djr to bank in Shayzien.

Lastly, there is a spot with 4 rotting logs just north of Ver Sinhaza. Players who have completed A Taste of Hope may use Drakan's medallion to teleport to Ver Sinhaza and run north-east through the opening to quickly reach the spot. The same teleport may be used for reasonably quick banking, though there are faster alternatives. Combining this method with e.g. an Ardougne cloak 1 or a player-owned house with an altar/pool will eliminate the need for prayer potions. Using the amulet to bank and to return to the spot you can gather over 1,500 fungi per hour.

Additionally, players who have completed Desert Treasure and own a player-owned house with both a Kharyrll portal and chapel (66 Magic and 50 Construction) can greatly increase their profit margin. Simply, do the above, but use house tabs to replenish Prayer at the chapel, and return via the portal room. Players can also use World 330 if they do not have a player-owned house and use other players houses to refill prayer and teleport.

At 85 Construction, you can collect over 1,100 fungi, and the following method should be implemented. First, use the fairy ring network to teleport to bkr. Run west until you see three rotting logs. Stand in the middle of the three rotting logs and cast Bloom. Mort myre fungi will not spawn every time. Always pick the northern log last because when picked, you will return to the middle, removing the need to click back. After a full inventory, use a ring of dueling teleport to Castle Wars to bank, then teleport to house, use your chapel or rejuvenation pool to gain Prayer back, and then use the fairy ring bkr and repeat.

A better spot to farm Mort Myre Fungi overall after A Taste of Hope. 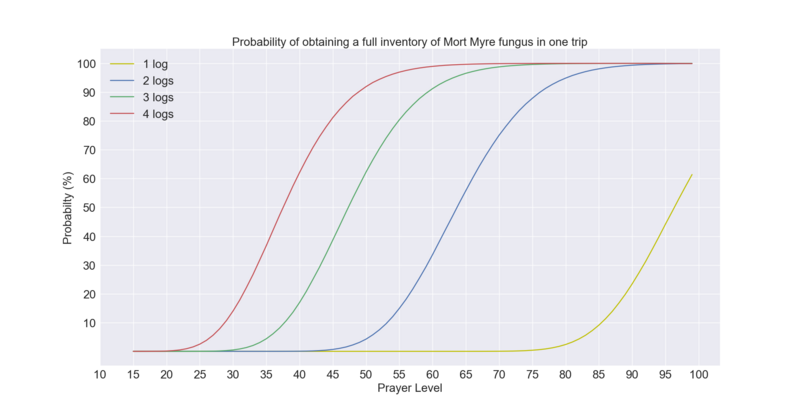 Probabilties of obtaining a full inventory of fungus (not using any prayer restore) while in the vicinity of 1, 2, 3, or 4 logs. Obtained using a rough Monte Carlo simulation (assuming equal probability of producing 1-4 fungus and equal probability of consuming 1-6 prayer points).
Due to constantly changing prices on the Grand Exchange, some information in this article may or may not be current.
It is strongly recommended to check the live prices on the Grand Exchange before making large investments in any method.
All prices on this page are cached, meaning it is possible that they appear out of date.
To force a new cache of this page, click this link.
If a money making method is out of date, you can edit it or leave a message on the talk page.
Retrieved from ‘https://oldschool.runescape.wiki/w/Money_making_guide/Collecting_mort_myre_fungi?oldid=14304616’
Category:
Hidden category: