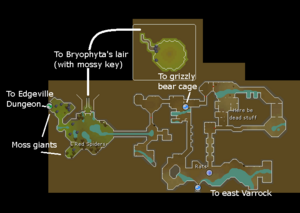 As the sewer is a multi-combat area, and the deadly red spiders are aggressive, players with a combat level lower than 69 can get attacked by multiple spiders at a time, so having food is recommended. The deadly red spiders are found immediately after reaching the end of the sewer tunnel going east-west. Since this area is secluded off and only reached after slashing through a spider's web, a slash weapon (any cheap scimitar or sword) or a knife will be required to slash through to get to the eggs. If the player chooses to bring an air staff for the Varrock Teleport method, the slash item will have to be dropped every run. If not, the player can keep their slash weapon equipped to save an inventory slot.

The eggs will spawn roughly every 42 seconds at the southernmost part of the sewer. There are multiple aggressive deadly red spiders and moss giants, which can be safespotted (which allows players to be out of combat to switch worlds). To collect the eggs, the player will need to come out of the safespot.

It is recommended that players bank the eggs in the eastern Varrock bank until the player is satisfied with the amount of eggs collected, and then sell them.

Due to constantly changing prices on the Grand Exchange, some information in this article may or may not be current.
It is strongly recommended to check the live prices on the Grand Exchange before making large investments in any method.
All prices on this page are cached, meaning it is possible that they appear out of date.
To force a new cache of this page, click this link.
If a money making method is out of date, you can edit it or leave a message on the talk page.
Retrieved from ‘https://oldschool.runescape.wiki/w/Money_making_guide/Collecting_red_spiders%27_eggs_(free-to-play)?oldid=12278846’
Category:
Hidden categories: