Wine of Zamorak is used by members to create ranging and bastion potions. As such, they are very valuable items. They respawn every 28 seconds on two tables in the Chaos Temple; which is located north-west of Goblin Village, and are guarded by Monks of Zamorak. The second Wine of Zamorak spawn can be accessed by climbing up the ladder by the entrance. Climbing the ladder requires you to have a total level of 500 while wearing a set of Zamorak monk robes 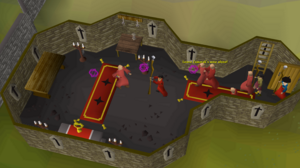 The basics of collecting the wine of zamorak are as follows:

The inventory setup should consist of law runes and water runes (and wizard's mind bombs if doing the second method).

Wield a staff of air and wear zamorak monk robes.

This method is more consistent as you only need to camp one spot.

Climb up the ladder and begin casting Telekinetic Grab on wines. Then when your inventory is full, teleport to Falador and repeat.

You're going to want to bring some wizard's mind bombs for this method, as stealing wines from the bottom floor lowers your stats. It is recommended to bring 10 or so, depending on your magic level. Bring some food (lobster is recommended) as well to heal yourself.

You're also going to want to turn off Auto Retaliate as it won't allow you to climb the ladder.

This method is about twice as fast as the previous method.

The wines have a respawn rate of 30 seconds, so set a timer to go off every 30 seconds for maximum efficiency

The 500 and 750 skill total worlds are often packed. It is recommended to use a less busy world. This is especially useful for the first method.

Due to constantly changing prices on the Grand Exchange, some information in this article may or may not be current.
It is strongly recommended to check the live prices on the Grand Exchange before making large investments in any method.
All prices on this page are cached, meaning it is possible that they appear out of date.
To force a new cache of this page, click this link.
If a money making method is out of date, you can edit it or leave a message on the talk page.
Retrieved from ‘https://oldschool.runescape.wiki/w/Money_making_guide/Collecting_wine_of_zamorak_(free-to-play)?oldid=14055336’
Category:
Hidden categories: