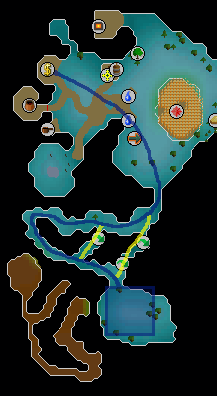 The on-foot route to and from the Zanaris bank.

Depending on the method of travel, a round trip to the Cosmic Altar takes about a minute and a half to two minutes, including banking and filling up essence pouches. To start out, players should withdraw a full inventory's worth of pure essence from the bank, and then fill their pouches with the remaining essence; this should come out to 54 essence per trip if utilising all four pouches, which will have to be repaired by use of the NPC Contact spell (67 Magic) to contact the Dark mage as they degrade. At the bare minimum, profits can get as low as 124,740 assuming 810 essence is bought and then crafted per hour.

Using the Slayer ring and fairy rings, you can make about 40 trips to the Cosmic Altar per hour. With 59 Runecraft (giving double cosmic runes) and especially 75 Runecraft (giving access to the giant pouch), this can be highly profitable. Start out at the Edgeville bank. Unload pure essence and store it in your pouches, and then take out essence for your inventory. Teleport via the slayer ring to Rellekka Slayer Caves, exit, and use the fairy ring to the west to teleport to Zanaris. From there, run south to the Agility shortcut; if you have 66 Agility, go through both of them, although you may get stuck and take a small amount of damage before passing through. Run further south and enter the mysterious ruins, and then go directly to the altar. Craft your essence in your inventory and pouches, and then teleport back to Edgeville with your amulet of glory. With this method, you can craft about 2,160 essence per hour. Without the giant pouch, that will drop to about 1,680.

Alternatively, a quest point cape or necklace of passage (Wizards' Tower teleport) can be used to access fairy rings after banking in Edgeville.

Players with 80 Construction can use a fairy ring in their house for transport to Zanaris, in excess of 45 trips per hour are achievable when using this option. To begin the player will need to build a fairy ring, Lunar altar, and Revitalisation pool or greater in their POH; a basic jewellery box or greater is also useful but optional. Additionally, a rune pouch filled with law, astral, and dust runes will save inventory space. Once the runes have been crafted, use an equipped ring of dueling to bank at Castle Wars before casting Teleport to House and use your fairy ring to travel Zanaris, refilling run energy at your revitalisation pool as needed. The lunar altar will allow swapping to the Lunar spellbook briefly to cast NPC Contact when essence pouches need repairing, remember to switch back to the normal spellbook with the altar again afterwards. This method can return 734,580 at 75 Runecraft assuming 2385 essence is bought and crafted per hour.

Due to constantly changing prices on the Grand Exchange, some information in this article may or may not be current.
It is strongly recommended to check the live prices on the Grand Exchange before making large investments in any method.
All prices on this page are cached, meaning it is possible that they appear out of date.
To force a new cache of this page, click this link.
If a money making method is out of date, you can edit it or leave a message on the talk page.
Retrieved from ‘https://oldschool.runescape.wiki/w/Money_making_guide/Crafting_cosmic_runes?oldid=14266758’
Category:
Hidden category: