Crafting cosmic runes through the Abyss 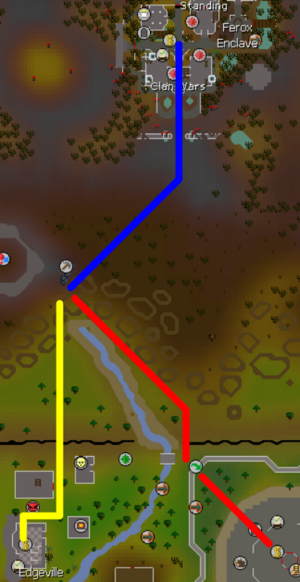 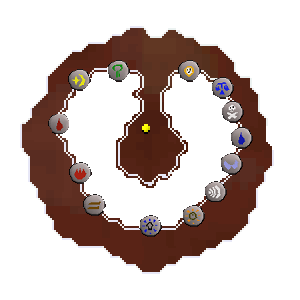 At average speed, one can do about 50 trips to the Cosmic Altar via the Abyss per hour, using the amulet of glory to teleport back to Edgeville, and using an equipped pickaxe to mine through the rocks in the Abyss. You need to recharge your pouches every nine trips, at the Dark mage, to prevent the giant pouch from degrading.

Using the small through giant essence pouches, you can hold up to 54 essence per trip, resulting in a profit of 12,312 coins per trip (ignoring other expenses). This assumes at least level 75 Runecraft – without making two cosmic runes per essence, this is not as good a money making method.

The Mage of Zamorak is located low-level Wilderness, near the source of the River Lum. This is a fairly safe area, but there might be player killers, so it is advised not to take expensive items on the trips to the Abyss. The best setup would be cheap but protective gear (e.g. dragonhides). Use of weight-reducing clothing and abyssal bracelets is also recommended. Players should also take an equipable emergency teleport to escape player killers. Inside the Abyss, the creatures there will be aggressive and might do fair amounts of damage. See Abyss#Inside the Abyss for more information on how to navigate the Abyss. Once inside, enter the cosmic rift and craft the essence in your inventory and your pouches. Teleport back to Edgeville with an amulet of glory and repeat.

A ring of dueling is optional, but it helps in case players forget to swap out an exhausted glory for a charged one. If all the glory teleport charges run out, however, teleport to Taverley or Burthorpe with a tab or games necklace, and recharge the amulets in the Fountain of Heroes.

Another way possible is to use Teleport to house tablets instead of Amulets of Glory, provided you have a Revitalization Pool, you can replenish your stamina and use a Mounted amulet of glory to go back to edgeville.

Assuming all pure essence is bought on the Grand Exchange for 2 coins each, you can make approximately 615,600 coins per hour using this method (ignoring other expenses).

Check the live price and daily volume of items on the Grand Exchange before making large investments in any method.
All prices on this page are cached, meaning they may be out of date.
To force a new cache of this page, click this link.
If a money making method is out of date, you can edit it or leave a message on the talk page.
Retrieved from ‘https://oldschool.runescape.wiki/w/Money_making_guide/Crafting_cosmic_runes_through_the_Abyss?oldid=14266759’
Category:
Hidden category: