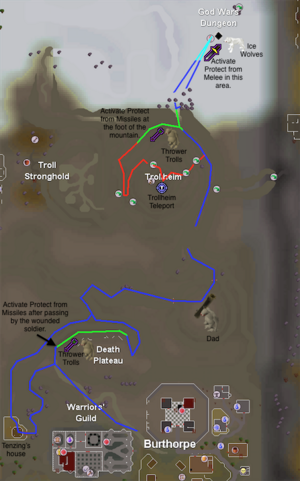 Getting to the God Wars Dungeon.

The profit rate assumes 115 kills per hour. Your actual profits may be higher or lower depending on your speed and luck.

Aviantese drop four noted adamantite bars fairly commonly (about 1 in 4 kills), but players must have completed the hard Fremennik Diary in order to get the bar drops noted. This makes killing them fairly profitable, as each kill will on average give one adamantite bar. They also drop rune daggers and runite limbs, which can be alched, but the bulk of their profit comes from adamantite bars. Because they are noted, it means you can stay indefinitely if you aren't in need of food. 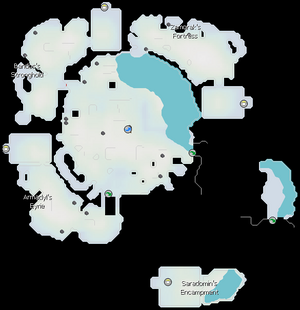 Aviantese are found inside Armadyl's Eyrie in the God Wars Dungeon or in the Wilderness version of God Wars. See this article for information on how to reach the God Wars Dungeon. Armadyl's Eyrie is the south-west part of the dungeon, and it requires 70 Ranged to enter. Having a piece of Armadyl-affiliated clothing, as well as a Zamorak-related item, is strongly recommended, or else everything in the facility will be aggressive toward you.

Depending on whether you have Bones to Peaches or not, once you run out of food or you're finished, teleport out and sell your adamant bars and other items on the Grand Exchange.

Using a Toxic Blowpipe it is possible to reach 300+ kills per hour. Although the costs increase, with the increased number of kills the profit remains similar to the method described above.

Due to constantly changing prices on the Grand Exchange, some information in this article may or may not be current.
It is strongly recommended to check the live prices on the Grand Exchange before making large investments in any method.
All prices on this page are cached, meaning it is possible that they appear out of date.
To force a new cache of this page, click this link.
If a money making method is out of date, you can edit it or leave a message on the talk page.
Retrieved from ‘https://oldschool.runescape.wiki/w/Money_making_guide/Killing_aviansies?oldid=14246230’
Category:
Hidden category: