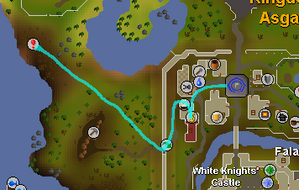 Getting there and returning. 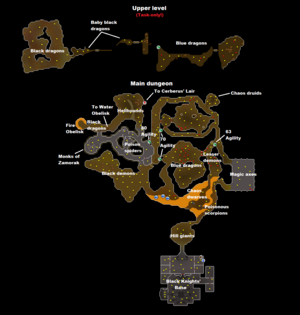 Blue dragons are to the right of the entrance. Navigate the obstacle pipe with 70 Agility to reach them.

This guide assumes 100 kills per hour. Your profit per hour may vary depending on your speed.

Blue dragons always drop dragon bones and blue dragonhide (along with other chance drops), which sell for 2,564 and 1,716 respectively. This makes each kill worth 4,280 coins.

Players who have completed Dragon Slayer II may prefer killing blue dragons in the Myths' Guild basement, as they are much closer to a bank alongside ease of access with the mythical cape teleport.

The dragons can be attacked safely and effectively with Ranged (level 70+ recommended) or Magic (Fire Bolt or Fire Blast recommended). For engaging the dragons with Melee, 90 Combat or higher is recommended. If using Melee it is highly recommended for you to bring gear that offers protection against dragonfire, Anti-dragon shield and an Extended anti-fire potion is enough.

The single blue dragon in the Heroes' Guild can be safespotted easily, accessible very quickly with a games necklace, banking in the Rogues' Den, though it may be difficult to find an empty world.

When using Taverley Dungeon, each trip will require a few minutes to bank hides and bones. The best method of banking is to teleport to Falador using a Falador teleport tablet, bank at Falador West Bank, and return to the dungeon; use the shortcut in the western wall of the city (west of the Falador west bank) and run north-west to the dungeon entrance. With 70 Agility, the agility shortcut to the blue dragon area may be used, and running from the Falador west bank to this area of the dungeon only takes a couple of minutes. The shortcut can be used at 65 Agility, but will require the use of Summer pies to boost to 70 Agility. Having at least 65 Agility is recommended to use the pipe shortcut; it is very time consuming to run around the dungeon and will require the player to bring the dusty key, which will greatly reduce kills per hour. Kills per hour may be maximised by picking up drops in rotation, as it takes a second or two for each dragon's drops to appear after being killed.

Check the live price and daily volume of items on the Grand Exchange before making large investments in any method.
All prices on this page are cached, meaning they may be out of date.
To force a new cache of this page, click this link.
If a money making method is out of date, you can edit it or leave a message on the talk page.
Retrieved from ‘https://oldschool.runescape.wiki/w/Money_making_guide/Killing_blue_dragons?oldid=14325509’
Category:
Hidden category: