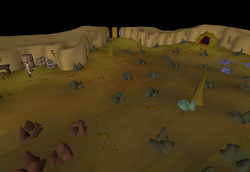 P2P players looking to gather adamantite ore as effeciently as possible should do so within the Mining Guild. The Mining Guild features eight adamantite rocks, an invisible +7 boost to mining, a 50% reduced rock respawn timer, and 1/30 chance per adamantite rock to acquire Unidentified minerals, which can be exchanged for mining gloves and its variants, which are useful for acquiring additional ore, or for clay packs, providing ~6% additional profit. There are also two mining rocks outside the P2P zone.

At level 80 players should expect to mine between 150-180 ores per hour with the proper equipment. See image for a reccomended potential "path" for mining ore.

Adamantite ore respawns every two minutes within the P2P portion of the mining guild.

At around level 80 mining you may find yourself waiting for adamantite ore to respawn. For optimal rates you should hop worlds when this happens- ideally, hop between two uncrowded worlds. This is more reliable than randomly hopping in a single direction, allowing you to increase your rates while eliminating the risk of hopping to a random world that is already inhabited or mined out.

Due to constantly changing prices on the Grand Exchange, some information in this article may or may not be current.
It is strongly recommended to check the live prices on the Grand Exchange before making large investments in any method.
All prices on this page are cached, meaning it is possible that they appear out of date.
To force a new cache of this page, click this link.
If a money making method is out of date, you can edit it or leave a message on the talk page.
Retrieved from ‘https://oldschool.runescape.wiki/w/Money_making_guide/Mining_adamantite_ore?oldid=14079577’
Category:
Hidden categories: