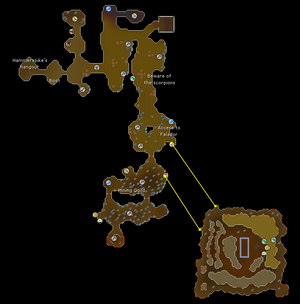 The Dwarven Mine houses both Motherlode Mine and the Mining Guild, which are across from one another and are optimal spots.

Coal, worth (242 coins), is in constant demand because it is a necessary ingredient in the production of steel, mithril, adamant, and rune. There are a myriad of locations to mine coal, but the best place overall for members to mine it is at Motherlode Mine due to the abundance of coal gained from the pay-dirt. Also, the coal bag purchased there for 100 golden nuggets can also hold up to 27 coal, which is very useful, should a player decide to mine coal elsewhere, such as at Coal Trucks with sufficient progress in the Kandarin Diary or at Monastery Mine with an Amulet of glory, Ring of dueling, and Ardougne cloak.

Players can also find uncut gems while mining, which can increase profit. A charged amulet of glory can help members find even more gems, but it is not required. A gem is obtained at around 1/282 chance when mining a rock (without an amulet of glory).

On the other hand, the best free-to-play locations include the Mining Guild, which requires 60 Mining and above to enter, Barbarian Village Mine, and Wilderness Coal Mine. Aside from the Mining Guild where banking is done at Falador East Bank, the latter two mines are not too far from the Edgeville bank.

Although coal only takes 30 seconds to respawn after being mined, and the world switching tactic could still be used, the last option would be Wilderness Coal Mine only if the Mining Guild is overcrowded and/or Barbarian Village Mine is deemed insufficient. The Wilderness Coal Mine has 34 coal rocks, but it is in level 9 Wilderness, just north-west of Edgeville, and is bombarded with aggressive skeletons (regardless of Combat level) and the always-looming threat of a player killer. Since it is in the Wilderness, players should not take anything they are not prepared to lose. It's also suggested for players to have a decent Defence and Hitpoints level and mine with caution. Furthermore, players should bring a few pieces of food and a Melee weapon in which the weapon is optional, but it could still help. Also, members could wear the Serpentine helm, which could help ward off threats. After a full inventory, banking can be done by either running south-east into Edgeville or using an Amulet of glory to teleport there depending on membership status, but it's strongly advised to only use this mine as a last resort as well as any other risky and dangerous locations.

Due to constantly changing prices on the Grand Exchange, some information in this article may or may not be current.
It is strongly recommended to check the live prices on the Grand Exchange before making large investments in any method.
All prices on this page are cached, meaning it is possible that they appear out of date.
To force a new cache of this page, click this link.
If a money making method is out of date, you can edit it or leave a message on the talk page.
Retrieved from ‘https://oldschool.runescape.wiki/w/Money_making_guide/Mining_coal?oldid=13514259’
Categories:
Hidden category: