The Dwarven Mine is one of the closest mines to a bank in a free-to-play world.

Note: Any player is able to mine in the Dwarven Mine, but it is recommended to be combat level 65 or higher in order to avoid the aggression from King Scorpions. 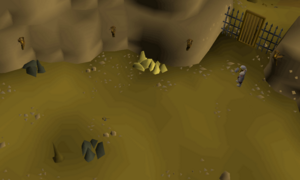 Scorpions lurk around the ore rock, so under-levelled players will often be attacked by them.

Note: The results are assuming your character is able to mine the ore in under 30 seconds. The total output per hour will vary depending on a player's mining level, and pickaxe.

Depending on your mining level, and pickaxe, a player is able to mine 2 gold ore a minute, as the gold rocks have a cooldown of 1 minute. If you choose to use this method, you will be able to mine at most 120 gold ore in an hour.

A faster method to mine gold ore requires you to world-hop. World hopping can save you up to 50 seconds from waiting as it will take approximately 5-10 seconds for the game to load you into the next world. Using this method will allow you to be able to mine up to 200 gold ore an hour.