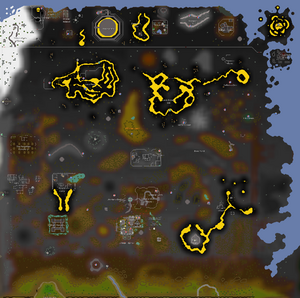 Mining runite ore, which is a high-level ore that frequently sells for a high price (11,227 coins) due to its use in producing runite bars via Smithing, is an achievement in itself. They are highly popular and often are depleted of their resources, so players need to switch worlds in order to find fresh runite rocks. By doing quests and unlocks, more locations to mine runite will become available to you.

Non-members can only mine runite at one location - the Wilderness Rune Mine, which contains two rocks. It is located north-west of the Lava Maze in level 46 Wilderness. Since it is in the Wilderness, players should not take anything they are not prepared to lose. It's also suggested for players to mine with extreme caution since there is the always-looming threat of a player killer.

Before venturing out there, players should bring a few pieces of food and Armour. Having a scout, such as a noob account, can be used to assess the risks and find available rocks.

If you have a members account however, a wealth of locations will become available to you. Quests such as Song of the Elves, and unlocking account progressions such as fire cape will give way to less crowded mining locations.

At 99 mining, GP rates can exceed ~1.2m gp/hr with optimal equipment & unlimited rocks between 8-10 world hops (2 rocks per world). However, Runite mining can be very competitive, even at the most remote locations. Players must hop worlds every time the ore is depleted, in search of fresh rocks, which respawn every 12 minutes. Total level worlds such as 1750, 2000, 2200 are more likely to contain unmined runite rocks than non-total worlds.

The rate at which runite is mined greatly depends on how much competition is at the mine. Players can easily mine 50, and up to ~110 ores an hour if you get rocks all to yourself. With no direct costs, this profits between 561,350 and 1,178,835 coins. A relatively afk player hopping between total level worlds can expect ~65 ores per hour, or 729,755 coins. Factor in Varrock armour 4, and the player has a 10% chance of mining two ores at once. Players can also use superior mining gloves, which give a 12.5% chance of the rock not depleting.

Check the live price and daily volume of items on the Grand Exchange before making large investments in any method.
All prices on this page are cached, meaning they may be out of date.
To force a new cache of this page, click this link.
If a money making method is out of date, you can edit it or leave a message on the talk page.
Retrieved from ‘https://oldschool.runescape.wiki/w/Money_making_guide/Mining_runite_ore?oldid=14301186’
Category:
Hidden category: