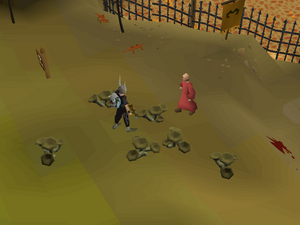 Monks of Zamorak are evil clerics that follow Zamorak, god of chaos. They are found in several locations, including the Asgarnian chaos temple, Taverley Dungeon, Paterdomus, Battlefield mine and Deep Wilderness Dungeon. A level 17 Monk of Zamorak is in a cage under the stairs on the ground floor[UK]1st floor[US] of Varrock Palace. He is often used in free-to-play servers to train magic using the Curse spell.

Despite them being feared they are extremely useful for Ranged training as they are weak towards ranged and there are many safespots. The Chaos Temple is also a useful spot because there is an altar located in the temple for prayer. The monks in Paterdomus temple provide less experience than regular monsters, providing players with only a quarter of the usual experience gained from dealing damage.

One under the radar spot where there are only melee-only combat is directly in the red salamander hunting spot near the Tree Gnome Village.

A level 30 Monk of Zamorak must be fought during the Priest in Peril quest.

The average Monk of Zamorak kill is worth 488.5.