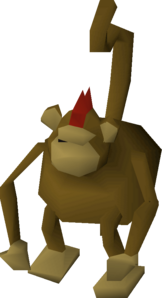 The monkey is obtained during the Monkey Madness I quest. During the quest, the player is tasked with saving a monkey from the Ardougne Zoo in order to earn the trust of Awowogei. Players obtain a monkey by wielding a Karamjan monkey greegree, then talking to the Monkey Minder to be put into the cage with the other monkeys. Afterwards, they must talk to a monkey with an M'speak amulet worn and convince the monkey to get into the player's backpack. To get out of the cage, players unequip the greegree and speak with the Monkey Minder who will remove them from the cage. If players want to keep the monkey, they cannot teleport with the monkey in their inventory; using any form of teleportation will cause the monkey to vanish. It also cannot be banked.

Dropping the monkey will make it leave the player's inventory and wander around for a bit, then disappear after around 30 seconds. It can be picked up again by talking to it. However if the monkey is dropped on the island of Karamja, it becomes a monster like other monkeys found on Karamja and exclaim "Yay! I'm free!", granting the player twice their Thieving level in Thieving experience, then disappear.

While in the player's inventory, the monkey can be poked, much to its annoyance, and it will often interrupt the player with forced dialogue. It can be fed bananas, monkey nuts, monkey bars and banana stew by using them on it, although it will claim to not want the latter items, despite eating them anyway. The monkey will also occasionally eat bananas in the player's inventory without notice. Players can obtain a one-time medium clue scroll from the monkey by manually feeding it bananas. The chance of receiving the clue scroll is rare (1/256 chance[1]), and when it occurs, a message will appear in the player's chatbox saying "The monkey chews on the banana and spits out a clue!". Skipping the dialogue after feeding the monkey does not count towards the chance of receiving the clue scroll.