Monkey is an item obtained after the completion of Monkey Madness II. Players can get this item by searching the easternmost crate at the Crash Site Cavern entrance. Upon doing so, a dialogue box will appear in chat stating, "There's a sweet little monkey hiding in the warm crate. You gently pick it up."

Players are able to Release the Monkey via right-click, prompting a dialogue box to appear stating, "The monkey scampers back to the warmth of its crate." If players wish to retrieve the Monkey again they will have to search the crate back at the Crash Site Cavern entrance.

Players are also able to transform the Monkey via right-click into several other variants upon completing a number of laps at the Ape Atoll Agility Course. Note that laps are only tracked upon completion of Monkey Madness II.

If the player owns an un-transformed Monkey and searches the crate again the chatbox will state, "The crate is empty." However, if the player has transformed their monkey into any other variant, they will be able to grab more monkeys and transform them into all of the other variants. 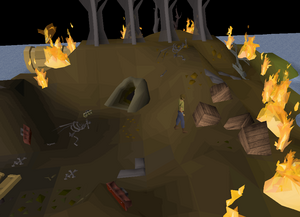 The monkey is located in the crate that the player is facing.