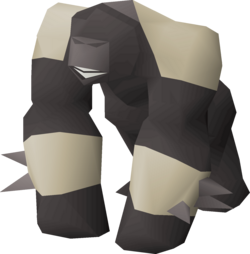 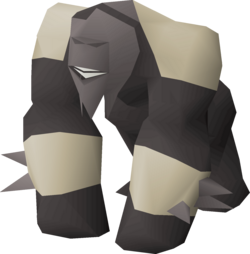 Monkey Guards are level 167 gorillas that reside in the Temple of Marimbo, found on Ape Atoll. They reside on the ground floor[UK]1st floor[US] and 1st floor[UK]2nd floor[US] of Ape Atoll's Temple of Marimbo and are the strongest guard found on Ape Atoll. They have a large amount of health and throw vicious punches that can hit up to 14. When they have very low health, they will beat their chest, causing them to heal 25 hitpoints, which is about 20% of their maximum health; they appear to be able to do this indefinitely but only while in melee range. Monkey Guards drop larger versions of monkey bones, which give 18 prayer experience points when buried. However, these are not tradeable.

Because the Monkey Guards heal themselves and because there is an altar in the temple, players can choose to train combat of all forms by fighting them with Protect from Melee and stat-boosting prayers. The only downside to this method is the Monkey Guards' high defence. When players are low on Prayer, they can pray at the nearby altar. The Monkey Guards also heal themselves often, providing more experience per kill, but making it difficult to kill them for their bones.

Players should wear strength-boosting armour, as prayer bonus is irrelevant with the nearby altar. Using Dharok the Wretched's equipment here used to be a popular activity, but it is much more advisable to do this at Nightmare Zone instead. It is wise to have multiple antipoisons or to use Rapid Heal, in case the nearby level 1 spider poisons you (poison hits for 1).