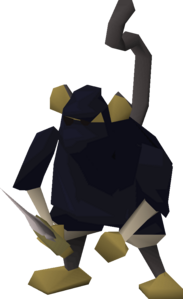 Monkey Guards will appear if players talk to a monkey on Ape Atoll while in human form. One or two of these may appear along with one of the named ninja monkeys. The named monkeys are Duke, Uodai, Ouhai, Oipuis, and Uyoro.

Unlike the named ninja monkeys, the monkey guards only drop small ninja monkey bones, which can also be obtained from killing the abundant Monkey Archers.

If they hit the player, the player will appear in the Ape Atoll prison, making it tricky to kill these.

Instead of killing these yourself, they can be killed for small monkey ninja bones by walking in monkey form on the trapdoor in the warehouse, then quickly taking the greegree off and waiting for them to appear. If Karam notices them, he will kill them instantly. If he does not kill them all, simply re-equip the greegree and the monkey guards will disappear when they try to attack you. Afterwards, equip your greegree and pick up the bones.

For the RFD "Monkey Ambassador" portion, to obtain a ninja greegree simply kill a monkey archer (combat level 83) on the third level of the Ape Atoll Temple.

Players could also kill them by getting them stuck behind an obstacle. Solihib's hut is perfect for this, as when players talk to Solihib in human form, the guards are often stuck behind a jungle plant, and players can safely kill them with ranged or magic. However, the player should have decent stats and be quick as they disappear after a while.

For players with a high combat level, killing them directly may be easier as Karam does not always notice them and he himself often gets stuck on obstacles.