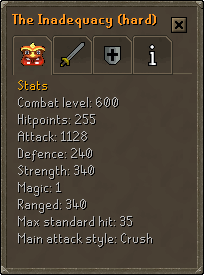 The interface that appears after casting Monster Examine.

Monster Examine is a lunar spell that requires 66 Magic plus the quests Dream Mentor and Lunar Diplomacy to be cast. It costs 1 Mind rune, 1 Cosmic rune, and 1 Astral rune to cast and grants 66 Magic experience per cast. There are a few monsters in the game which can not be examined by this spell.

The spell gives a large amount of information about the monster examined in four tabs:

If a monster does not have a bonus of any kind, it is omitted from the interface.

If a monster does not possess a certain criteria, it is omitted from the interface.