From Old School RuneScape Wiki
Jump to navigation Jump to search
This article is about a monster's maximum hit. For other uses, see Maximum hit. 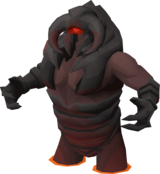 The lunar spell "Monster Examine" may be used to identify the max melee hit of a monster. If a monster doesn't use melee attacks, and only attacks with ranged or magic (such as Dark Wizards), then it will display the monster's max hit with the attack style it uses. Monsters with more than one attack style (ex. melee and magic), may have two different maximum hit levels, one for each attack style. This information is useful for players that can protect from a certain style of attack with prayer.

Monsters have a certain fighting style too, making them more or less effective versus what you are wearing.