From Old School RuneScape Wiki
Jump to navigation Jump to search
This article is about the location. For the music track, see Mor Ul Rek (music track).
The RuneScape Wiki also has an article on: rsw:TzHaar City

Mor Ul Rek, also known as TzHaar City is a city located underneath the volcano on Karamja. It is inhabited by the TzHaar, a race of golem-like volcanic creatures. It is home to several combat-focused minigames, and uses the currency of Tokkul. Having a fire cape or fire max cape is required to enter the interior portion of the city.

In the TzHaar language, the words mor, ul and rek are translated as old/retired, circle/ring and young/youth respectively.

Mor Ul Rek was founded by the TzHaar people. The TzHaar led an isolated life with four castes; the Ket, Xil, Mej and Hur castes. The TzHaar-Ket patrol the city to protect its inhabitants from any dangers. The TzHaar-Xil hunt volcanic animals to feed their society. The TzHaar-Mej work as advisors, while a few also act as leaders. The TzHaar-Hur craft various items and equipment.

The TzHaar were eventually discovered by humans, who immediately began to establish diplomatic ties with them. The TzHaar are cautious of the humans, dubbed JalYt, as the rest of their city is closed off while the TzHaar decide if the JalYt can be trusted to enter. To prove their trustworthiness, the JalYt may enter the bigger portion of the city if they show the TzHaar guards their fire cape, obtained from defeating TzTok-Jad. After passing the barrier once, one does not need to bring the fire cape anymore to pass the barrier.

Mor Ul Rek had a very large incubation chamber (this is most likely why it was closed off). Following TzHaar biology as they gain memories of their ancestors while in the lava, the TzHaar realized that the deeper the egg was placed in the lava, the more memories they would absorb. They continued to repeat this process to gain ancient knowledge, though they eventually drained the chamber of all lava and discovered an ancient incubation chamber inside. The TzHaar decided to place eggs in there, but it was a grave mistake; the hatched eggs became feral monsters (referred to as Jal) who fought each other for dominance. One of these, TzKal-Zuk, eventually controlled the Jal, and the TzHaar offered it sacrifices to appease it, fearing that it would attempt to surface. These feral TzHaar are very intimidating and much more powerful than their current counterparts; even the stronger TzHaar-Ket are hesitant to challenge them.

The TzHaar, wary of JalYt interference, refuse to let players enter the Inferno until they give up a fire cape.

Note: The shops will not accept coins as currency; only Tokkul. If players sell any items to the shops, they will also receive Tokkul in return, instead of coins.

Additionally, there are sulphur vents scattered all over the city which can be used as permanent fires to cook food on and safespots against the TzHaar. 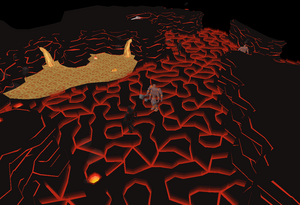 The following places exist in the outer area of Mor Ul Rek. The TzHaar allow all JalYt to enter this area. 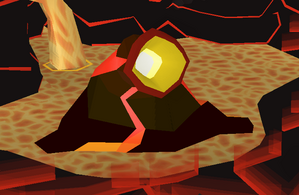 A lava forge, which acts as a furnace for the TzHaar.

The following places exist within the inner area of Mor Ul Rek. The TzHaar will only allow JalYt who show a fire cape to the TzHaar-Ket guarding the entrance to enter this area.