From Old School RuneScape Wiki
Jump to navigation Jump to search
The RuneScape Wiki also has an article on: rsw:Morrigan's javelin 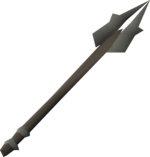 Morrigan's javelin is a ranged weapon requiring level 78 Ranged to wield. Unlike other javelins, they cannot be used with ballistae and are a standalone weapon. They may also be retrieved with Ava's devices.

In Deadman seasonals, it is part of Morrigan's equipment, a set of Ancient Warriors' equipment, and is dropped by any monster found in the Wilderness as part of a global loot table, the chance being relative to the combat level of the monster.