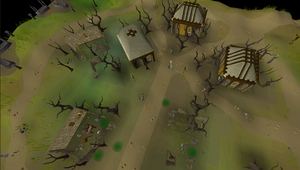 Mort'ton was once a quiet market town that specialised in death. By using the natural caves underneath the town as tombs, Mort'ton became a centre for burials. Unfortunately the foul vapours from the Sanguenesti region cursed the villagers of Mort'ton, turning them into afflicted. Some of the dead interred below began to appear on the surface, known as shades.

Only the weakest of the shades, called Loar shades, roam the surface around Mort'ton. The stronger shades - phrin, riyl, asyn and fiyr shades reside in the caves that they were buried in. Whatever dark force that revived them keeps them in Mort'ton, as none of these shades have ever been seen in Mort Myre.