Mort Myre Swamp, once a forest known as Humblethorn,[1] is a swampland in western Morytania. Players must have started the Nature Spirit quest in order to access it. It is plagued by ghasts, and not even a full inventory of food will keep players safe here because ghasts will decompose any kind of food. It is highly recommended for players to carry a fungi-loaded druid pouch, which can only be obtained during Nature Spirit, with them as they travel through the swamp. Completing the quest is also a requirement to gain access to the gate shortcut. Also, Dwarf multicannons cannot be set up in this area.

The swamp is divided into several parts. The main part of the swamp is on the west, The Hollows are to the east, and the path to Mort'ton is to the south.

The main part of the swamp is accessed by a gate west of Canifis, guarded by Ulizius, which is opened during the Nature Spirit quest. The first thing players will come across is the ghasts, as described below, but snails also inhabit this region. In the far south-east is a bridge leading to the southern part of the swamp.

The eastern part of the swamp, The Hollows, can be accessed by a small break in the swamp weed just to the west of the boat in that area (marked by a transportation symbol on the map in The Hollows). Players can also find:

The eastern part of the swamp is of the same character as the western part. It is itself cut in half, and players can only cross from one to the other via a rope bridge, which they mend during the In Search of the Myreque quest.

The southern part of the swamp is a long winding path between the main part and Mort'ton. There are no ghasts here, but plenty of snails.

Players will also find Zealot at the south of this section, at the entrance to the Abandoned Mine. It is here that players can start the Haunted Mine quest.

Navigation through the swamp[edit | edit source] 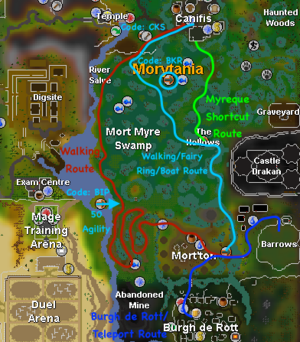 Navigate the swamp using any of the coloured routes.

Directly on the right, there is a map that might be useful for navigation through the confusing swamp of Morytania. It can be used to get to or back from Canifis, Mort'ton, Burgh de Rott, Barrows, etc.