From Old School RuneScape Wiki
Jump to navigation Jump to search
The RuneScape Wiki also has an article on: rsw:Mos Le'Harmless Cave

The Mos Le'Harmless Cave, also called the "Cave of Horrors", is found on Mos Le'Harmless, which players can reach only after completing the Cabin Fever quest. The cave is the only place where Cave horrors and Albino bats are found.

A light source is required in the cave unless the player has lit a Fire of Eternal Light near the entrance. In the north-east, two staircases ascend to small islands with teak and mahogany trees and seaweed spawns.

The Dwarf multicannon can be used in the cave.

The entrance is found just east of the town by a small beach.

The two islands on the north-east coast of Mos Le'Harmless, accessible through the cave. Each island features both a single teak and mahogany tree. 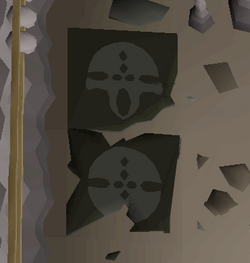