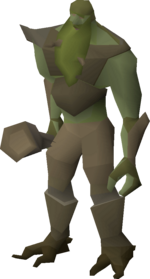 Moss Guardians are the guardian spirits of Glarial's Tomb, and are significantly larger and stronger than ordinary moss giants. They are encountered during the Waterfall Quest when the player enters the tomb to obtain Glarial's amulet, and must later be killed during the Roving Elves quest to obtain the consecration seed. They can only be fought unarmed, as it is impossible to take weapons, armour, ammunition or runes into the tomb. They cause a magical splashing effect when they attack, and will occasionally hit with Magic instead of Melee.

After completion of the Roving Elves quest, one can be fought in the Nightmare Zone. Players do not need to be unarmed to attack it there.