Mount Karuulm is a volcano found in the northern edge of the Kebos Lowlands. It is inhabited by the Kahlith, servants of the Tasakaal, a trio of ancient TzHaar that have left the Karamja Volcano long ago.

This volcano is unique in that it is sulphurous, giving the lava a bluish appearance due to the combination of sulphuric gases and lava, and is the only known sulphurous volcano in Gielinor.

Sometime during the God Wars, before the arrival of refugees that would go on to found Arceuus, Lovakengj and Piscarilius, the continent of Zeah was uninhabited and untouched by the war, until the arrival of a Dragonkin named Karuulm, who travelled to the volcano to find a way to lift the Curse ailing his kind due to interruptions from his fellow Dactyl. 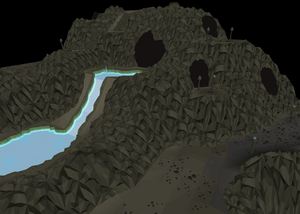 During his occupation in Mount Karuulm, he had managed to create the wyrms and drakes. The wyrms were created intending to bring about their original purpose, but they were deemed failures. Sometime later, he created drakes, one he had suggested to Kerapac but was rejected as Kerapac preferred working with dragons instead. Eventually, he created the hydras after some deliberation. The hydras impressed him, and he created an enhanced version, which showed promise but still deemed a failure because he could not replicate its traits. Karuulm eventually abandoned the mountain after the influx of new arrivals.

After an unknown amount of time passed, three TzHaar, unable to stand by and wait for their master after watching the world fall into disarray, left the Karamja Volcano and arrived at Mount Karuulm. Due to the sulphuric nature of the volcano, they became the Tasakaal. The Tasakaal intended to bring balance to the world, and several humans, inspired by their cause, began to work for them. These humans changed into the Kahlith, and work with the Tasakaal to bring balance; for every life, there must be a death.

The Kahlith explored the abandoned laboratory and humans training their Slayer skill would go in and slay the monsters inside. Some areas were protected by the Kahlith to maintain the balance, only allowing those who had been assigned them as a slayer task to use their facilities.

Mount Karuulm can be reached by various methods:

The Mount Karuulm mine is found to the west of the volcano, and contains six iron ore rocks and five coal rocks. It is a small distance away from the bank. Mining some iron here is an easy task in the Kourend and Kebos Achievement Diary. 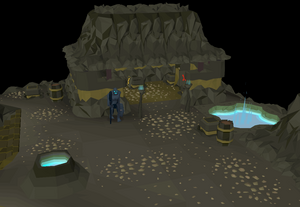 The bank on Mount Karuulm, as well as a sulphur vent found near it.

Because of the recent influx of humans travelling to the Kebos Lowlands, the Kahlith have set up a bank, which can be found on the north-east building on the volcano's summit, as well as a poll booth.

The sulphur vents contain sulphuric lava bubbles inside, which cannot be used to cook food, unlike sulphur vents in Mor Ul Rek. Instead, the suplhur vents on Mount Karuulm are used to charge bottled dragonbreath in order for them to be usable. 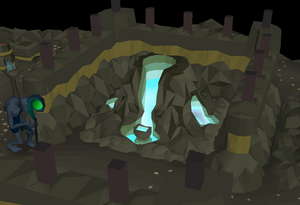 The furnace on Mount Karuulm.

A small volcanic furnace can be found south of the bank.

Konar quo Maten, the slayer master, can be found on the southern side of the summit. Players need to have a combat level of at least 75 to be assigned a slayer task from her.

In the centre of the summit lies the entrance to the Karuulm Slayer Dungeon and the Slayer Master Konar quo Maten. It contains a variety of monsters, as well as draconic creatures not found anywhere else.

While no damage is taken upon initial entry with the three Tasakaal, players who wish to explore further must wear boots of stone, boots of brimstone or granite boots or they will be rapidly burned, taking 4 damage every tick. However, players who have completed the elite Kourend & Kebos Diary can wear any type of footwear without being rapidly burned. 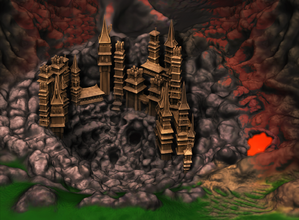 A concept art of the city of Keruulm.
Retrieved from ‘https://oldschool.runescape.wiki/w/Mount_Karuulm?oldid=14272382’
Categories:
Hidden category: