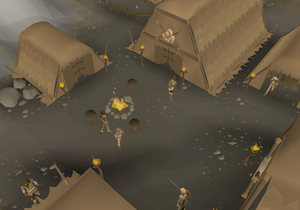 The Mountain Camp is the current settlement of the migratory Mountain Tribe and is located near the Troll Stronghold. It is also the focus for most of the Mountain Daughter quest.

Due to its remote location and lack of resources, the Mountain Camp is rarely visited by players. Its only non-quest use is for a Treasure Trails clue. If you have not started Mountain Daughter, bring a rope to enter. Go up the path just north of the guard and use your rope on the boulder.