From Old School RuneScape Wiki
Jump to navigation Jump to search
The RuneScape Wiki also has an article on: rsw:Mountain Daughter

Mountain Daughter is a quest in the Fremennik quest series. In the quest, the player must assist the chieftain of a mountain camp in the mountains east of Rellekka in finding his daughter. 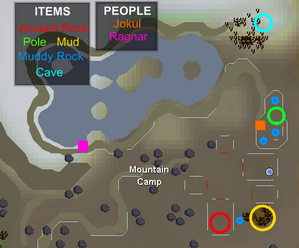 Make your way to the Mountain Camp east of Rellekka and north-east of the Golden Apple Tree. To get to that area, you can use the enchanted lyre and head east; walk north from Seers' Village or use the fairy ring code ajr and then go north a bit; or if your house is in Rellekka, teleport to your house and go east, or by using Fremennik sea boots head east. 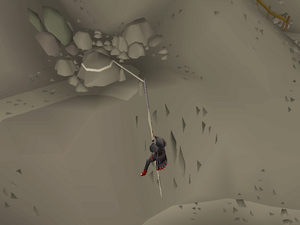 A player using a rope to climb up the cliffside.

Start up the path to the Mountain Camp, and attempt to climb over the rockslide. The guard says you are not welcome and does not allow you to pass. Just a bit to the left is another, narrow path. Follow it, and use your rope on the boulder that says "push boulder" and you will automatically climb down.

Note: you can skip trying to climb the initial rockslide and go directly to the boulder on the second path.

Follow the path into the village, enter the longhouse to the east, and speak to Hamal the Chieftain by asking, "Why is everyone so hostile?", to begin the quest. Speaking of his tribe, Hamal tells you that they are citizens of Rellekka, although due to differences they have moved out to become closer to nature, disagreeing with the Fremennik tradition of choosing their tools over skill. The chieftain tells you about his missing daughter and after much arguing against "employing" an outerlander, he eventually allows you to search for her. From this point on, you can enter the camp by climbing over the rockslide.

Head south of Hamal's house, and take some mud from the bubbling mud pond.

If you did not bring a staff, go north of Hamal's house to Jokul's place and pick up the pole. 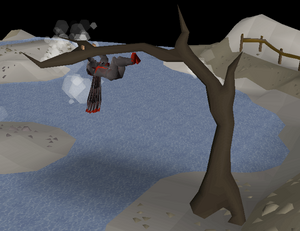 Climbing the tall tree to gain access to the island.

Just north of Hamal's tent are mountain goats. Follow the path leading west along the lake. Follow it until you reach a tall tree by the geysers above the path you came up.

Note: The Dramen staff can no longer be used as a pole vault as it was changed from a staff to a blunt weapon.[1]

You hear the voice of the spirit of the chieftain's daughter Asleif Hamalsdotter, who is dead. She asks you to make peace between her tribe and Rellekka and to also find a new food source for the camp. Agree to help her. To return to shore, use a plank on the flat stone. You can do her two tasks in either order.

Note: Both tasks can be started at the same time. This reduces going back to the Mountain Camp multiple times. Plan it out accordingly.

Return to the Mountain Camp, and talk to Hamal the Chieftain. Ask about the people of Rellekka, and he tells you that he sent a villager named Svidi to initiate a simple trade route, but he hasn't yet returned. Head to the rockslide that first blocked your entrance to the Mountain Camp. Climb over it, and go into the forest north-west of the rockslide, outside the entrance to Keldagrim. Locate and speak with Svidi. To find Svidi, go to the black unicorns and look for a fast moving yellow dot on your mini map between the fence shortcut and the south fence turn. you must run to catch him once spotted.

Note: Make sure to choose the option "Can't I persuade you to go in there somehow?", as the other option will cause him to walk off and you will have to find him again.

He will tell you he's afraid of the Fremennik in Rellekka and thinks that they might kill him. Offer to help him enter Rellekka and he agrees if you can secure a promise from the chieftain that he will be safe.

Head to Rellekka, and talk to Brundt the Chieftain in the longhall. He will give you a safety guarantee, promising not to hurt Svidi if you can retrieve a relic - an ancient rock - that the Mountain Camp tribe stole from Rellekka long ago. 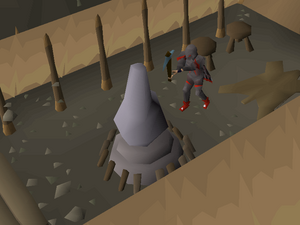 A player mining the Ancient Rock.

Return to the Mountain Camp, and enter the large tent south-west of Hamal the Chieftain. If you want, you can first talk to Hamal, but he refuses to let you have the rock. Right-click to use your pickaxe on the Ancient rock located in the southern tent to acquire half a rock. If you're wielding your pickaxe, you will have to right-click on the ancient rock, as it cannot be mined using left-click. Take this back to Rellekka, and talk to Brundt the Chieftain, who will agree to share the rock and give you the guarantee of safe passage. Take the guarantee to Svidi to initiate peace talks between the two tribes.

Items needed: A pair of gloves
Items recommended: A ring of dueling or a Camelot Teleport

Return again to the Mountain Camp and speak with Hamal, and then talk to Jokul, who is in the tent north of Hamal, looking after his mountain goats. He will tell you that he thinks the members of the Mountain Camp could survive if the seed of a White pearl fruit, a hardy plant which can grow anywhere, were planted in the area.

Note: You must have talked to Jokul before being able to pick the fruit. 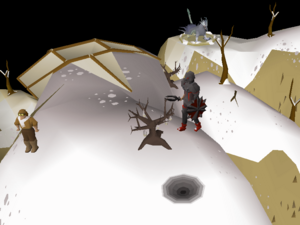 A thorny bush, just south of the gnome glider on the peak of White Wolf Mountain.

Travel to the peak of White Wolf Mountain and look for thorny bushes near the gnome glider. If you have completed The Grand Tree quest, you may use a ring of dueling to teleport to the Duel Arena which is near a gnome glider. Head west from the Duel Arena to the glider, then fly to the mountains. Alternatively, you may use a Camelot Teleport and walk up the mountain. Put on your gloves (4 damage will be inflicted if not wearing any, and you won't get the fruit seed), pick a White pearl fruit off the thorny bushes and eat it. You will automatically spit out the White pearl seed.

Go back to the Mountain Camp and give the White pearl seed to Hamal the Chieftain, who accepts your solution for feeding the tribe.

Items needed: An axe, combat equipment, a staff (or pole found by Jokul), and a plank

After you've completed both tasks, go back to the shining pool and speak to Asleif again (make sure to pole vault, and use your plank on the flat stone). She asks you to convince her father that she is really dead. She was attacked by a creature (the Kendal) and dragged off nearby to the north where she was killed. Leave the island and head to the north side of the pool (alternatively, cross the gap without using the plank; you'll end up on the north side). Follow the path east to a cave blocked by dead trees. Chop down the ones that block your path with an axe until you reach a cave entrance (if you face problems chopping down the trees, stand to the west side of the first tree when chopping it down to walk over the stump).

Enter the cave and make your way to the large cavern. You find the Kendal as well as numerous corpses near a central pillar. Talk to the Kendal, and when it asks who you are, say, "It's just me, no one special", and then "You mean a sacrifice?". The Kendal tells you that it is the god of the northern lands.

Say that he actually looks like a man in a bearsuit, to which he finally admits. After you blow his cover, he also confesses to killing Asleif more than ten years ago. Humbly request her remains, to which he refuses as he cannot let anyone know his true identity. Threaten to kill him, and he'll attack you. He has 50 hitpoints and a combat level of 70, and all damage can be blocked if you use the Protect from Melee Prayer. If you are using Ranged or Magic, you can find a safespot around the skeletons to attack him.

Note: It is possible to defeat the Kendal with a Dwarf Multicannon. If safespotting, be careful though: after attacking the boss, another one will spawn. The cannon will hit him too, making him aggressive, and repeating the process multiple times.

Once he dies, a Bearhead mask will appear in your inventory. Take Asleif's corpse, which lies in the south-eastern corner of the pillars (corpse of woman), and exit the cave. Cut your way back out of the dead trees and head back to Hamal the Chieftain. Tell him what you learned and show him his daughter's corpse.

Items needed: 5 muddy rocks, a staff (or pole found by Jokul), and a plank

Hamal asks you to give her a proper burial by building a grave on the island at the centre of the pool topped with a cairn, symbolising the longboats used to cross the seas, and some of her possessions. He tells you perhaps Ragnar has one of her possessions for you to use. On your way up, gather five muddy rocks from the mountain goat pen (they respawn quickly, so you can just stand on one until you have all five if you'd like). See the map on the top for locations. 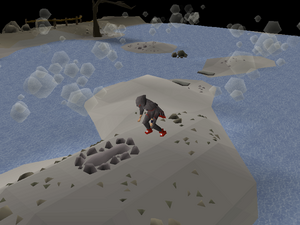 A player creating the burial cairn for Asleif.

Follow the path up to Ragnar (he is just past the tall tree), and speak with him. He gives you Asleif's necklace, which he had intended to give her as a gift. Climb up the tall tree, pole-vault the clump of rocks, and use the plank on the flat stones to make your way back to the small island. Bury the corpse there; your character will immediately go to the designated burial location. Use the muddy rocks on the burial mound to create Asleif's burial cairn. 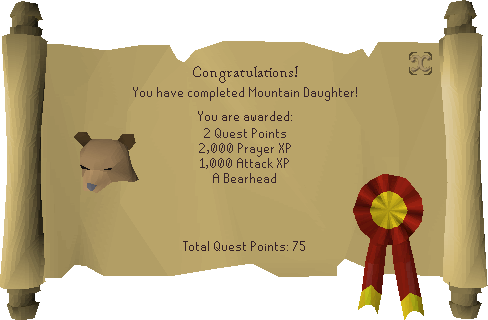 Completion of Mountain Daughter is required for the following: