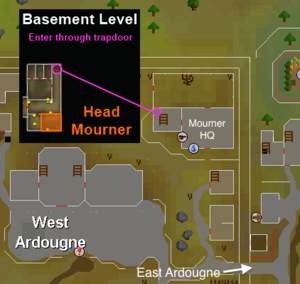 This map shows the location to the entrance of the Mourner Tunnels.

The Mourner Tunnels are located under Mourner Headquarters in the north-eastern part of West Ardougne. The tunnels are only accessible by wearing a full Mourner gear acquired during the first part of Mourning's End Part I quest. The house is also involved during both Biohazard and Plague City quests, although the tunnels remain inaccessible. If you have lost your mourner gear you can still teleport to the dark beast lair via slayer ring.

After the completion of Song of the Elves, no Mourner gear is required to access the tunnels.

Tunnels and the Temple of Light[edit | edit source]

Under the headquarters, the player will see Mourners wielding what looks like a Crystal halberd. The player will also find the Head Mourner and a gnome tied to a torture table. Both of the NPCs are involved in Mourning's End 1 and 2. During Mourning's End Part II the player will receive a New key from the Head Mourner, which will allow the player to access the Mourner Tunnels that lead to the entrance of the Temple of Light. The Death Altar is located within the depths of the Temple of Light, which is the only way of accessing the altar other than via the Abyss. The player should beware of the Dark beasts along the path because they are aggressive and hit hard. In addition, the tunnels house a small mine that contains one of the twenty-six runite rocks available in the game. 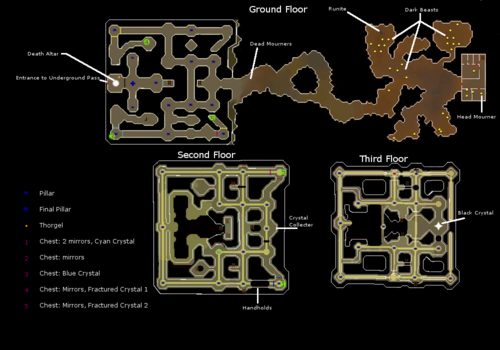 A map of the underground tunnels beneath Mourner HQ.
Retrieved from ‘https://oldschool.runescape.wiki/w/Mourner_Tunnels?oldid=14288724’
Categories: